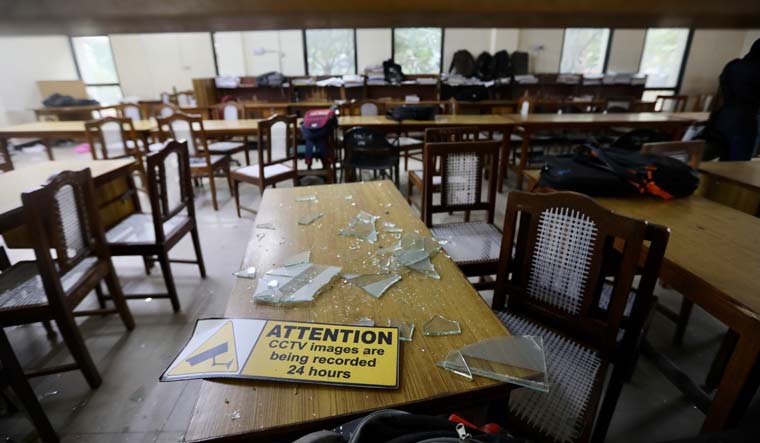 The library of the Jamia Millia Islamia University that was stormed by police Sunday in New Delhi, India, Monday, Dec.16, 2019 | AP

The Jamia Millia Islamia on Sunday clarified that it has not released the new video which is circulating on social media showing some men in paramilitary and police uniform beating up students in the university's library on December 15.

"It has come to our notice that some video with regard to police brutality in Dr Zakir Husain Library of the Jamia Millia Islamia (JMI) is in circulation. This is to clarify that the video has not been released by the university," the institute's public relations officer Ahmad Azeem said.

The video was released by the Jamia Coordination Committee (JCC), a group comprising JMI students and alumni. The group was formed after the alleged police brutality on the campus on December 15.

The university had turned into a battlefield on December 15 as the police entered the campus to look for outsiders who were involved in incidents of violence and arson a few metres away from the educational institute during a protest against the Citizenship (Amendment) Act.

According to the public relations officer, the JCC, which is actually a joint coordination committee of students and alumni of the university, is spearheading the stir against the Citizenship (Amendment) Act, the National Population Register (NPR) and the National Register of Citizens on the Maulana Mohammed Ali Jauhar Road outside the university's gate number seven.

"We have also requested Twitter to verify our official handle and will also ask other social media platforms to do the same," he said.

Special Commissioner of Police (Intelligence) Praveer Ranjan said the video has come to their knowledge and they will investigate it as part of their ongoing probe.

The Jamia Coordination Committee said it received the video from an "anonymous" source.

It also said the university has shared video footage of the police action in the library with the National Human Rights Commission (NHRC), which is probing the episode.

Sharing the video on Twitter, Congress leader Priyanka Gandhi said if no action is taken even after the video, then the government's intentions will stand exposed.

She also accused Union Home Minister Amit Shah and the Delhi Police of "lying" that Jamia students were not beaten up inside the library.

"Look at how Delhi Police is blindly assaulting students in the library. A boy is flashing his book but the policeman is continuing to attack him with batons," she said in a tweet in Hindi.

"Home Minister and Delhi Police lied when they said students were not beaten up in the library," Gandhi said in another tweet.

"If no action is taken even after watching this Jamia video, the government's intentions would stand exposed before the whole country," she added.

"Every defence of police action on students in universities, offered by Amit Shah, is untrue, misleading and politically motivated. Delhi police comes directly under Modi-Shah and this is how it treats young students studying in a library. Shame," Yechury tweeted.

BJP IT cell head Amit Malviya, however, said the investigating agencies must use the video as evidence, adding it was "good" of "rioters" to identify themselves.

"Students in library with 'masks' - Reading from shut books - Looking anxiously towards the entrance rather than being relaxed and immersed in studies, which is what a library is meant for... Anatomy of Jamia rioters who tried hiding in the library after a stone pelting session?" he posted on Twitter.