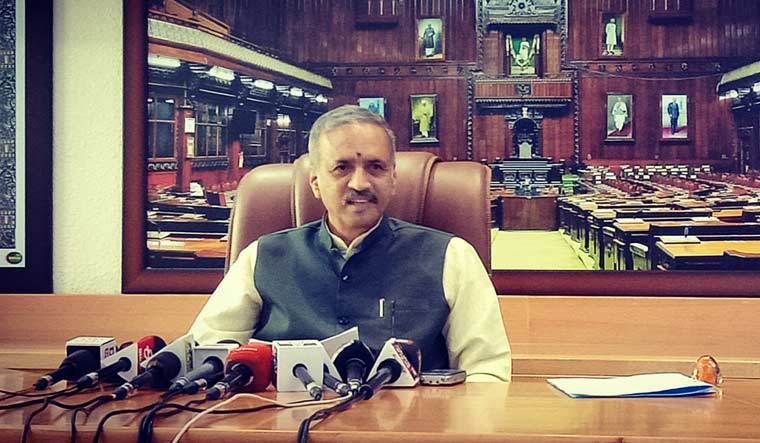 At a time when the country is witnessing growing protests over the new citizenship law, the Karnataka assembly is all set to hold a two-day special session on the Indian Constitution.

Lawmakers in the state may slog it out in the library during the legislature session that begins on February 17, as Assembly Speaker Vishweshwar Hegde Kageri appears to be serious about holding the refresher on Indian Constitution to "enhance the quality" of legislative debates in the house as well as to help the lawmakers familiarise with the different aspects of the Constitution.

"It will be a commemoration of the 70 years of adopting the supreme rule book. The session will help legislators understand their primary responsibilities as elected representatives—to frame laws. Often, the quality of the legislative debates is wanting, and important bills are not debated as much as they should be," said Kageri, adding that the deliberations on the Constitution will, however, be free of political debates.

The special session on March 2 and 3, is only an attempt to help the lawmakers “understand" the various facets of the statute and its aspirations, insisted the speaker, dismissing the possibility of the house turning into a political platform.

"We, as legislators, should rise above party politics and discuss the importance and relevance of the Constitution as we are the people who frame the laws. In fact, we celebrated 70 years of the Constitution on November 26 last year. But we could not hold the special session owing to the model code of conduct which was in place for the assembly byelections," said Kageri, adding that he would urge the legislators to take part in the discussion in large numbers.

"The decision on the blueprint for the session will be taken at the business advisory committee meeting,” he said.

The budget session will be held between March 2 and March 31. The 25-day legislature session will perhaps be a good start to achieve the mandated 100 days of session a year. Both the duration of the sessions and the quality of debates have both remained inadequate. The last calendar year (2019) saw the house meet for only 18 days.

"It is a long session of 25 days and I hope the members make use of it by raising important issues related to their constituencies, and actively taking part in the debates" said Kageri.

On March 5, Chief Minister B.S. Yediyurappa, who is also the finance minister, will table the state budget.

Ban on private TV channels inside the assembly

The speaker has decided to continue with the ban on the live coverage of the house proceedings by private channels.

Despite strong protest by the electronic media representatives, the speaker defended his decision saying it was a rule followed in the Lok Sabha, Rajya Sabha and many other state assemblies.

"We will provide you the uplink facility (feed from the state-owned channel). The ban on mobilephones and live coverage by private channels are nothing but measures to enhance the credibility and image of the assembly," said Kageri.