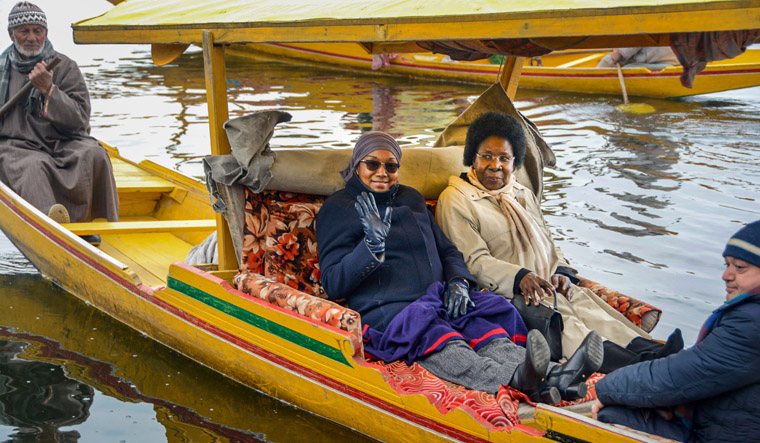 Iltija Mufti, daughter of PDP president Mehbooba Mufti, on Wednesday termed the visit of foreign envoys to Kashmir as "orchestrated diplomacy" that North Korean leader Kim Jong Un "would be proud of".

"How lovely! Kim Jong Un would be proud of such orchestrated diplomacy. The only thing missing is presence of 3 former J&K ex CMs in this 'curated shikara'. I'm sure they'd have lots to share," Iltija said in a tweet from her mother's Twitter handle.

She was reacting to tweets by Afghanistan's envoy to India Tahir Qadiry, showcasing the beauty of Dal Lake here.

A batch of 25 foreign envoys arrived in Jammu and Kashmir on Wednesday as part of a Union government-facilitated trip to help them have a first-hand assessment of the situation in Jammu and Kashmir, a region which faced months of harsh restrictions after its special status was revoked in August last year.

The envoys arrived at the Srinagar airport around 11am but could not go ahead with their scheduled visit to Baramulla in north Kashmir due to inclement weather, officials said.

The foreign dignitaries instead went for a Shikara (boat) ride in the famous Dal Lake.

Iltija also questioned how the Afghan envoy was able to access Twitter as the social media sites were banned in Kashmir.

Iltija hoped that the envoys would question the authorities here about the internet shutdown and detention of political leaders under the Public Safety Act.