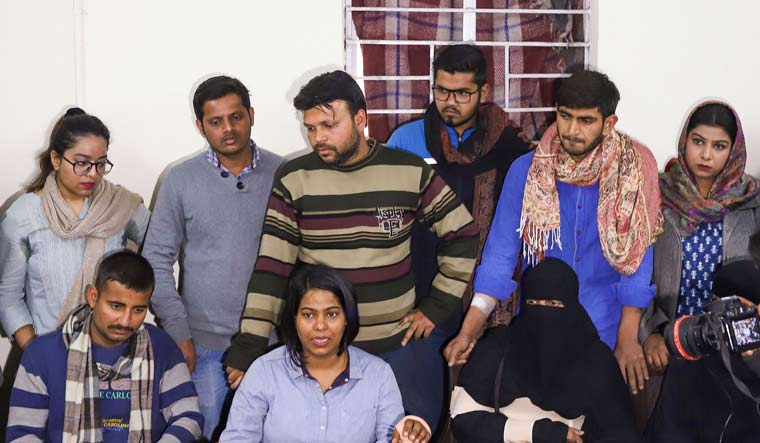 A group of Jamia Millia Islamia students on Wednesday alleged that the police kicked them on their private parts, tore their hijabs, questioned their patriotism and abused them when they tried to march to Parliament on February 10 against the CAA and the NRC.

The Delhi Police, however, denied these allegations, saying "no force was used against the protesters".

Hundreds of Jamia students and residents of nearby areas were stopped by police on Monday from taking out a march to Parliament against the Citizenship Amendment Act (CAA) and a possible National Register of Citizens, leading to a standoff during which scuffles broke out between protesters and security personnel.

The students claimed the police action was a "pre-planned" conspiracy to stop their march by attacking them.

Addressing a press conference in the national capital, around 20 injured students under the Jamia Coordination Committee narrated what they claimed were police brutalities.

"The students had barely reached the Holy Family Hospital when they found police standing prepared there in three layers. They were wearing steel gears, carrying flash rods, sticks and more. They started squeezing students with the steel gear. We were beaten up with shoes, flash rods and also kicked in the stomach," alleged Safura Zargar, one of the injured students.

The students claimed over 50 of them sustained injuries on their chest, stomach and their private parts during the scuffles.

They said they were taken to the MA Ansari Hospital at Jamia Nagar and Al Shifa Hospital. Twelve students are in the ICU, they claimed.

The students who were speaking to the media were discharged from the hospitals.

"A senior officer threatened me in front of a group of students, 'I will tear you apart'. I told him he can do whatever he wanted, but I won't be scared. Policemen also commented on my beard and questioned my patriotism," claimed Mujibullah Sawan, another injured student.

Denying the charges, South East DCP RP Meena said, "All allegations levelled against us are untrue. The entire protest has been videographed by us. In fact, some of our men were manhandled and they received injuries in the scuffle. No force was used against the protesters."

But an injured female student alleged, "When I saw a few students being thrashed, I rushed to help them. When I was about to cross the barricade, some policewomen pushed me down. One of the male policemen kicked in my private part and I fainted."

She claimed she can identify the policeman who thrashed her and was ready to do so if asked to.

Another female student claimed, "Policemen stood on my thigh. I have suffered a ligament tear. They tore my hijab. Policewomen passed lewd comments like 'take her in a corner and teach her what Constitution is'."

"The police deliberately didn't use lathis. They got into an argument and then began thrashing us. One of them had a grenade gun with which he hit me five times on my hand," claimed Abu Darda, another injured student.

"They kicked me in the stomach. They used hooks of the sticks and their steel gear suffocated us when it was pressed on our chest. The police told us, 'we will give you aazadi'," he alleged.

Some of the protesters were detained by the police on Monday and taken to Badarpur police station before being released.

"When I wanted to sit in the bus, they told me to squat on the floor so that people could not see what was happening inside. At the police station, policemen mocked us saying, 'who wants freedom'?" Darda claimed.

Another student also claimed he can identify the policemen who thrashed the students and passed objectionable statements.

The protesters had begun their march at noon from the university's gate number 7, which has seen demonstrations for the last two months, barring last Friday and Saturday when the protesters had shifted the venue due to elections.

The police had stopped the protesters after they had marched for two kilometres and appealed them not to go further as there was no permission and prohibitory orders had been imposed.

The protesters led by Jamia Coordination Committee (JCC) had refused to end their protest and insisted on marching to Parliament, clambering over barricades placed by the police before finally sitting on 'dharna' outside the university.