Explainer: Is muscular nationalism hurting the BJP in the states?

After Maharashtra, Haryana and Jharkhand, BJP faces another drawback in Delhi 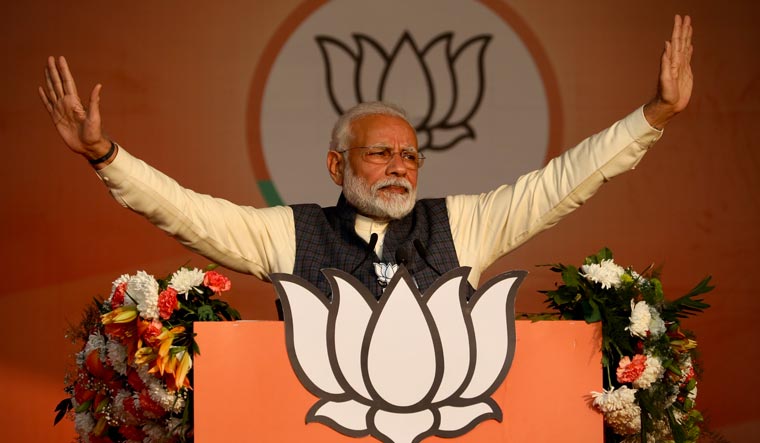 On Tuesday, Delhi Chief Minister and Aam Aadmi Party chief Arvind Kejriwal, after his party's landslide victory in Delhi, hailed the birth of a "new kind of politics". “A new kind of politics has emerged from the Delhi assembly polls,” Kejriwal said, addressing the party workers at the AAP headquarters. People have rewarded the party which built schools, hospitals and provided cheap electricity round-the-clock, he added. “Delhiites have given birth to a new kind of politics, which is called Kaam ki Rajniti [politics of works]," said Kejriwal, who was accompanied by his family and senior party leaders Gopal Rai and Sanjay Singh.

The AAP had replicated its fairy-tale victory of 2015 in a keenly-watched battle, winning 62 constituencies with a voting percentage of 53.57, while the BJP got eight seats with vote share of 38.51 per cent.

With PM Narendra Modi himself as the face, Union Home Minister Amit Shah spearheaded the party's poll campaign, predicting that BJP would win more than 45 seats. BJP Delhi chief Tiwari had tweeted that BJP will form the government in Delhi by winning 48 seats and had even dared people to save his tweet. Apart from its MPs and MLAs, the BJP also roped in chief ministers of party-ruled states— Vijay Rupani (Gujarat), Adityanath (Uttar Pradesh), N Biren Singh (Manipur), M L Khattar (Haryana), Jairam Thakur (Himachal Pradesh)— to canvass for its candidates.

After the most recent assembly elections in Maharashtra, Haryana and Jharkhand, the BJP's push for muscular nationalism in state polls has faced another drawback in Delhi. While Parliamentary and national polls would be another question entirely, it is worth noting that the party now governs a mere 35 per cent of the country's landmass, in comparison to over 71 per cent during its peak in 2017, when it was in power in the entire Hindi-speaking heartland.

Significantly, the party has suffered losses in states at a time when it has been successful in fulfilling its longstanding ideological promises, including nullifying Article 370, criminalising the practice of triple talaq and enacting Citizenship Amendment Act. The Supreme Court's verdict in favour of building a Ram Temple in Ayodhaya was also a big boost to the BJP.

Top party leaders in election rallies spoke at length about these "achievements" under the Modi government but the voting returns have been less than what they might have expected.

In all three state which have gone to the polls since Prime Minister Narendra Modi led the BJP to a landslide win in the general election, the party's vote share has fallen by big margins compared to the Lok Sabha polls. The saffron party's vote share was more than 55 per cent in Jharkhand and 58 per cent in Haryana in the Lok Sabha elections. However, it slumped to 33 per cent and 36 per cent respectively in the assembly polls in these two states, held barely a few months after the general elections. In Jharkhand, a Congress-JMM combine came to power after drubbing the BJP. For the first time since the state's formation, the party could not emerged as the state's single largest.

In Haryana, the BJP could not cross the half-way mark on its own. It had to ally with Dushyant Chautala's Jannayak Janta Party to cobble together a government.

In Maharashtra, the Sena-BJP pre-poll combine—though it registered a victory together—suffered substantial losses when compared to the previous assembly polls when they competed together. The Sena later joined the Congress and the NCP in an alliance.

Is the BJP's unique model of a muscular 'Indian nationalism' not working as expected?

BJP camp, after the polls

Some BJP leaders believe, as told to PTI, the defeat was mainly contributed by the "hyper-nationalist pitch" of the high-stakes Delhi poll campaign that focused on the anti-CAA protests at Shaheen Bagh and also lack of any answer to Kejriwal government's freebies including power and water supply and free rides to women in public transport buses. "The party had planned to promise a bouquet of free services to people including water and power as well as benefit of the Ayushman Bharat health scheme, but the idea was shelved and it could not become a part of the election manifesto," a senior Delhi BJP leader told PTI.

In the over three-week long high voltage campaign for the polls, the BJP leadership including Union Home Minister Amit Shah and party chief J.P. Nadda as well as Prime Minister Narendra Modi assailed AAP and chief minister Arvind Kejriwal over a host of issues including the Shaheen Bagh protest against the amended citizenship law and their alleged failure to come up with schools, hospitals and other facilities promised by them.

Shah would end his election speeches by appealing to people to press the electronic voting machine (EVM) buttons with such anger that its "current" was felt at Shaheen Bagh. The opposition AAP and Congress accused the BJP of running a campaign of "division and hatred" in the elections.

A section of Delhi BJP leaders held that the party went "overboard" while focusing on its agenda of "Hindutva and nationalism" in the campaign. "With party leaders seen prompting slogans like 'shoot the traitor' and giving speeches and terming a chief minister as terrorist in election campaign, you cannot expect to have a positive response from the masses," a top BJP leader told PTI.

Some BJP leaders also cited to the news agency a lack of a chief ministerial face, organisational shortcomings, failure to reach out to voters in unauthorised colonies and JJ clusters, and differences of leaders in Delhi party unit as possible reasons for the party's "humiliating" defeat. However, Delhi BJP chief Manoj Tiwari rejected the charge of opposition parties that his party fought the polls on a "divisive" agenda.

BJP national spokesperson Shahnawaz Hussain alleged that the party's poor show was due to Congress "shifting" its votes to the AAP in the elections. "BJP is the only party which has gained and our seat tally increased while even the number of AAP seats has gone down. Congress shifted its vote to the AAP yet we gave a good fight," Hussain told reporters at the Delhi BJP office.

How the BJP campaigned

Take the case of the Delhi election campaign. Union Home Minister Amit Shah has thrown himself into an extremely intensive campaign routine in the national capital, with his signature style of going hyper-local with a messaging that is largely national. The Union home minister criss-crossed the capital, holding nukkad sabhas (corner meetings), padayatras and bigger public meetings. He held three to four corner meetings and around two to three public meetings a day.

While the idea was to go hyperlocal in terms of reach, the party's messaging dealt mainly with a selection of national issues, the foremost being the recently enacted Citizenship Amendment Act, followed by abrogation of Article 370, ban on instant Triple Talaq and Ram Mandir. In his speeches, Shah has adopted an aggressive posture on CAA and attacked the incumbent AAP and the Congress for instigating anti-CAA protests. “Anti-India slogans were raised in JNU, and Modi ji put those responsible in jail. Permission is required of the Delhi government to prosecute them but it is not being given. If Kejriwal ji comes to seek votes, tell him to first give permission for their prosecution... These are the people who caused riots in Delhi,” Shah said at an election rally.

At the same time, he also took on the Kejriwal government on local issues, questioning the claims made by the incumbent with regard to the work done in areas such as education and healthcare. He has also attacked the AAP regime over 'unclean' drinking water and the non-implementation of Ayushman Bharat scheme in Delhi.

PM Modi, in his Delhi campaigns, had also directly pitted the BJP against the anti-CAA protesters on multiple occasions. "Be it Seelampur, Jamia (Nagar) or Shaheen Bagh, for the last several days, there have been protests over the Citizenship (Amendment) Act. Are these protests coincidental. No, this is not coincidental, it is an experiment," Modi had said during the campaign. Behind the protests, Modi added, is a political design aimed at harming national harmony. In Okhla's Shaheen Bagh, hundreds of people, including women and children, have been protesting since December 15 at Shaheen Bagh against the CAA and the NRC.

The campaign got bitter when Union Minister Anurag Thakur, in a rally, egged the crowd to say 'shoot the traitors', and the party's West Delhi MP Parvesh Verma made a controversial statement on Shaheen Bagh. Both Thakur and Verma were banned from campaigning for 72 and 96 hours respectively and also dropped from the party's star campaigner's list. On Wednesday, Verma was again barred from campaigning while Adityanath was issued a show-cause notice on Thursday for his alleged 'biryani for terrorist' remarks.

Lessons from the AAP victory

With the AAP leaders and workers basking in the glory of capturing Delhi for a third time in a row, the party insiders as well as its detractors on Tuesday attributed the party's stunning poll victory to a slew of schemes involving populist subsidies to Delhiites. Despite numerous provocations, the AAP refused to get involved in the Shaheen Bagh protests, the Citizenship Amendment Act (CAA), the Ram Mandir issue and several other hot-button ideological agendas of the day.

"Free electricity up to 200 units of power and almost next to nil charges over that, free rides for women in public transport buses, up to 20,000 litres of free water per month and free pilgrimage for senior citizens have paid us after all," confessed a party worker, heaving a sigh of relief over the electoral results.

The party workers recall that in the run up to the assembly elections, Chief Minister Arvind Kejriwal and other AAP leaders had in their interactions with voters during poll rallies had duly emphasised upon various Delhi government schemes, providing for a host of services to people either free of cost or at a highly subsidised rates.

The AAP dispensation had last October launched free rides for women in public transport buses on Bhai Dooj, asserting that it would empower women and ensure their safety in the national capital. The move was considered as a political step seeking support of women living in the national capital, said an upbeat AAP leader, adding the party was sure that it would benefit the party in the assembly elections.

Kejriwal had also announced free power consumption up to 200 units and 50 percent subsidy for those consumers using 201 to 400 units per month. Later, tenants were also brought under the ambit of the scheme. Until now, tenants would not be able to avail 50 per cent government subsidy on consumption of electricity of up to 400 units.

The Arvind Kejriwal-led government had also announced a complete waiver of water arrears for people living in colonies categorised as E, F, G and H. Consumers of the other four categories (A-D) were given a rebate ranging from 25-75 per cent on their long-pending dues. The AAP government also decided to waive development and infrastructure charges for new water and sewer connections in the city.

Kejriwal, who was also the chairman of the Delhi Jal Board (DJB), had in November said that people would have to pay just Rs 2,310 now to get new water and sewer connections. The government had also launched 'Mukhyamatri Tirth Yojana' under which senior citizens were offered free pilgrimage.