At DefExpo, PM Modi tests his shooting skill as India aims for the sky

Modi inaugurated the 11th edition of DefExpo in Lucknow 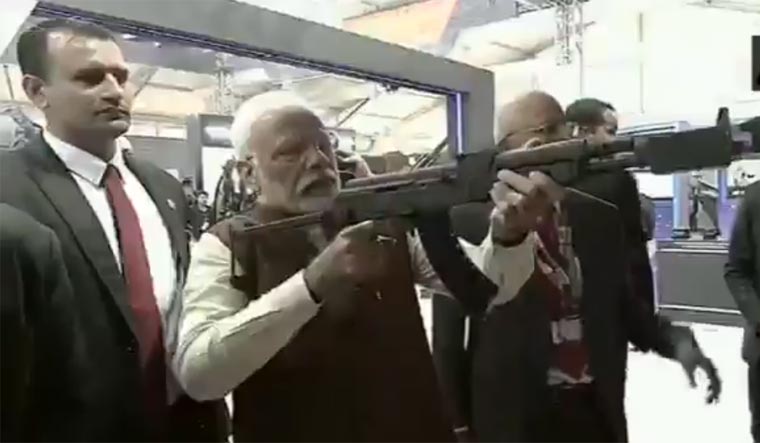 Prime Minister Narendra Modi tested his marksmanship on Wednesday in a virtual rifle range at the Defence Expo 2020 which he inaugurated in Lucknow. A video shared by the ANI on Twitter shows Modi taking aim with an assault rifle in his hand.

Uttar Pradesh Chief Minister Yogi Adityanath was also present along with Modi at the stall showcasing the virtual shooting range.

Assault rifles are usually used by the military or police force, which fires reduced-power ammunition from a detachable magazine. It can fire in either semi-automatic or fully automatic modes.

Earlier, while inaugurating the 11th edition of the biennial exhibition, the prime minister said India is significantly boosting its military might and even increasing presence in outer space responsibly.

At the same time, he said that strengthening of military prowess was not aimed at any country and asserted that India has always been a reliable partner of peace and stability in the region and beyond.

The five-day event is being attended by 38 defence ministers and top executives of 172 foreign defence majors and 856 Indian companies.

Hardselling India as an attractive investment destination, Modi set a target of USD 5 billion worth of military exports in the next five years and invited global defence majors to set up manufacturing hubs in the country.