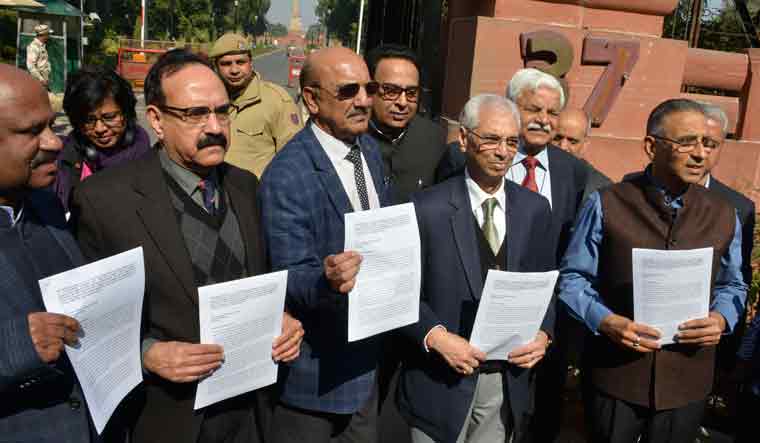 A delagation of 154 former judges, civil servants, armed forces officers, diplomats and intellectuals on Friday made a representation to President Ram Nath Kovind on what they called was an effort to create a “vicious atmosphere” in the country with regard to Citizenship Amendment Act (CAA), National Population Register (NPR) and National Register of Citizens (NRC) by “vested groups”, and seeking stern action against such forces. “Self-serving elements, in conjunction with a section of civil society, have embarked upon a malicious campaign of disinformation to mislead the innocent Indian public, especially the youth and a section of minorities, with a false and nefarious narrative about some recently enacted legislation like CAA, NPR and NRC for all Indians,” the delegation stated in its representation to the President.

The delegation said that the protests, while ostensibly claiming to oppose the policies of the Central government, are in effect, designed to destroy the very fabric of this country and harm the nation's unity and integrity. “We strongly feel that there is also an external dimension to the disturbances being created. We therefore, request the Government of India to look into this matter with all seriousness and safeguard the democratic institutions of the country and take stern action against such forces,” it said.

The group praised the Narendra Modi government for the “remarkable work” it has done in the last six years in spreading the country's ancient message across the globe that the world is one family. It said domestically, the present regime has taken certain long-pending decisions, with the objective of removing impediments for the fast track growth of the country, thereby energising the system and putting the nation on path to becoming a global power.

It listed efforts to abolish instant Triple Talaq, abrogation of the speical status for the state of Jammua and Kashmir, and “maintaining goodwill in society” after the apex court's verdict on Ayodhya amongst the government's achievements.

In a strong critique of the anti-establishment voices, especially the protests against CAA-NRC, the delegation said, “Whenever Indian society has faced challenges on its borders and encountered the onslaught of some of the foreign invaders, it was more because of internal chicanery of individuals and small groups of people for their personal agendas and benefits.”

It said a reference is being made in a “malafide manner” to Articles 14, 15 and 21 of the Indian Constitution, with regard to CAA, with a “deliberate design to misguide and provoke the masses”. "The fear mongering which is being spread across the length and breadth of India appears to be motivated and with a sinister design to harm the nation," the representation said.