Kejriwal's nomination delayed by a day, but all eyes still on New Delhi seat 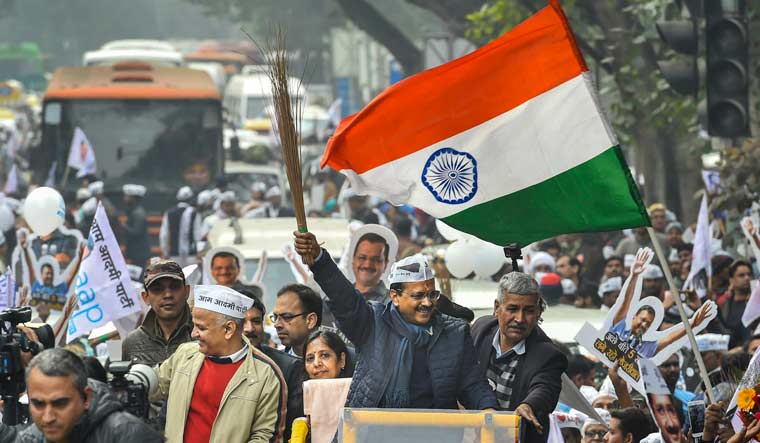 When Delhi Chief Minister Arvind Kejriwal was renominated as the Aam Aadmi Party's candidate from the New Delhi seat for the coming state elections, the reputation of the constituency as being a prestigious one and as one that is represented by the chief minister of the National Capital Territory was further strengthened.

Standing atop an open jeep, smiling and waving at the crowds, Kejriwal led a roadshow through the constituency on Monday as he moved to file his nomination for the coming state elections. However, due to a delay in the completion of the roadshow, Kejriwal had to postpone his plans of filing his nomination to Tuesday. Nevertheless, this would be his third straight contest from the constituency, which was earlier represented by former Congress chief minister Sheila Dikshit.

Kejriwal, before he embarked on the roadshow, prayed at the Valmiki Temple in central Delhi. He had begun his first campaign in 2013 from the temple as also the campaign for the 2015 Assembly election. The temple was the epicentre of his campaign as a debutant as his party symbol—the broom—had caught the fancy of the Valmiki community, who have traditionally been engaged in sanitation work.

In 2013, Kejriwal had chosen to contest from New Delhi, so as to make his contest with then chief minister Dikshit the talking point of the election, and the sheer audacity of the move had made the seat the focal point of the state polls.

The New Delhi Assembly constituency is part of the New Delhi parliamentary seat. It was carved out of the Gole Market and Sarojini Nagar constituencies. Among its voters are the movers and shakers of the Government of India, the primarily middle class government staff quarters, the trading community and also residents of slum pockets. The electorate in the constituency is over 1.44 lakh voters—79,047 males and 65,461 females.

Once seen as a Congress fortress, and represented by Dikshit, the constituency witnessed Kejriwal's giant-killing feat in 2013, when he defeated the then chief minister by a comprehensive margin of 25,864 votes. Kejriwal had secured 44,269 votes, while Dikshit had got 18,405 votes.

In the 2015 election, Kejriwal further cemented his position in the constituency, defeating BJP's Nupur Sharma by 31,583 votes. Kejriwal had secured 57,213 votes, while Sharma had polled 25,630 votes. The Congress's Kiran Walia was a distant third with just over 4,000 votes.