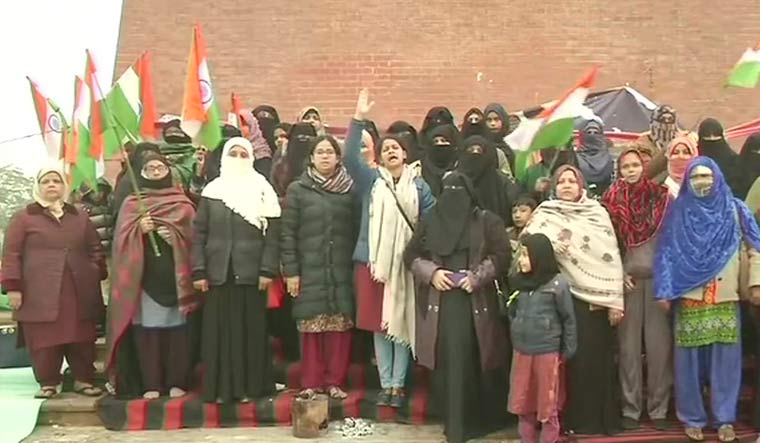 A women-only protest against the Citizenship (Amendment) Act at Lucknow’s Hussainabad Clock Tower has sprung up since Friday afternoon. The protest has been likened to the stir at Delhi's Shaheen Bagh, which started over a month ago and has been led by women.

Without a visible leader, or a call to action, on Friday afternoon, women began trickling to the iconic site, which is India's tallest clock tower, in old Lucknow. By evening, the crowds had swelled and the area was surrounded by the police. Electricity was cut off and the protesters were shivering on a particularly brutal winter evening with dense fog. They were prevented from lighting bonfires to keep warm. The temperature in Lucknow on Friday evening had dipped to 7 degrees Centigrade.

Torches on mobile phones were then lit as the protesters chanted Ram Prasad Bismil’s poem Sarfaroshi ki tamanna ab humare dil mein hai, dekhna hai kitna zor bazuae qatil mein hain (The desire for revolution is in our hearts, let us see how much strength is in the arms of the enemy) and Inquilab Zindabad.

In the initial hours of the protest, the police prevented vehicular traffic towards the area and even tried to keep men away. A quick social media call later, journalists and social activists thronged the protest site to register their support for the protesters.

Mohammed Nadeem Siddiqui, a freelance journalist who visited the protest site at 6am on Saturday morning, told THE WEEK, “About 200 women were still present at the site. Though some political faces were visible last evening, it is clear that the leadership lies with the women”.

When Siddiqui first visited the protest site on Friday evening around 7pm, he says that the cloud of fog was so thick that he couldn’t see a single soul.

Pooja Shukla, a protester, told THE WEEK that the protest had started at 12pm on Friday with just a handful of men and women. When the numbers started to swell and the police closed in, the women asked the men to leave as they did not want any confrontation with the police.

“At midnight, all lights were switched off. Public toilets in the area (which is a huge tourist attraction) were locked. But through the night, people kept coming with blankets and food. They offered us their toilets to use. We spent the night holding candles. You will find people of different political ideologies here, but this is a people’s movement. A new leadership will emerge from it,” she said.