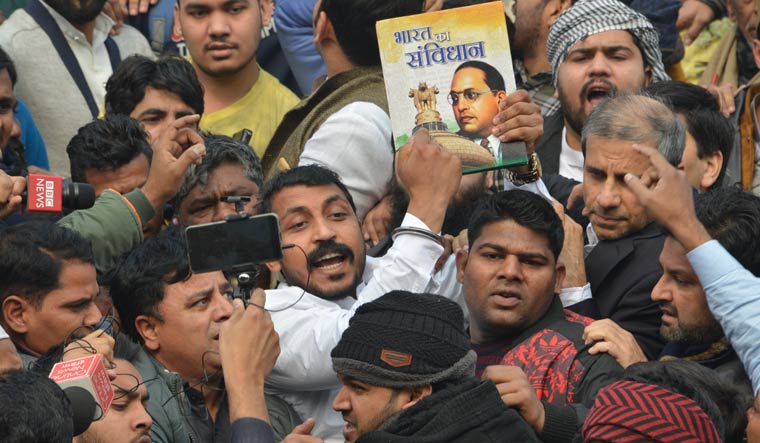 Hearing a bail plea filed by Bhim Army chief Chandrashekhar Azad, Delhi's Tis Hazari Court slammed Delhi Police saying people can carry out peaceful protests anywhere. "Jama Masjid is not in Pakistan, where we are not allowed to protest. Peaceful protests take place in Pakistan as well," the court said, ANI reported. What is wrong with protests, the court asked, adjourning the hearing to Wednesday.

Azad had sought bail in the court in connection with violence during anti-Citizenship Amendment Act protest in Daryaganj area, claiming that police invoked "boilerplate" charges against him and arrested him "mechanically" without following the due process of law. Azad, currently in judicial custody, claimed he has been falsely implicated as the allegations levelled against him in the FIR were not only "ill founded", also "improbable".

The bail plea, filed through advocate Mehmood Pracha, alleged that no specific incriminating role has been attributed to Azad in the FIR, whose contents were "vague" and based on "conjectures and surmises". It said he was at all times demonstrably making efforts to maintain peace.

The court had then pulled up Tihar jail authorities for acting in a "callous manner" by flouting laws that safeguard a prisoner's right and asked them to ensure that Azad was treated for polycythemia, a disorder of blood thickness, and taken to AIIMS, Delhi. It had said that despite knowing Azad's condition, he was given ordinary medical care and not the treatment needed to address his ailment.

Azad's outfit had called for a protest march from Jama Masjid to Jantar Mantar against the amended Citizenship Act on December 20, without police permission. Other 15 people arrested in the case were granted bail by the court on January 9. Azad's plea further said that he was willing to fully cooperate with the investigation in the case and would not tamper with any evidence or influence any witnesses.

"The police have invoked boilerplate charges against the accused (Azad) without the same being founded on any allegation or fact...and have arrested him mechanically without following the due process of law which renders the initial and his continued detention completely illegal," it said.

"Accused has been falsely implicated in the present case as the allegations levelled against him in the FIR are not only ill founded but also improbable and cannot bring home the charges mentioned in it... Further, the contents of the FIR are vague and based on conjectures and surmises," alleged the plea, also filed through advocates O P Bharti and Jatin Bhatt.