JNU students, teachers reclaim their voices after a night of mayhem 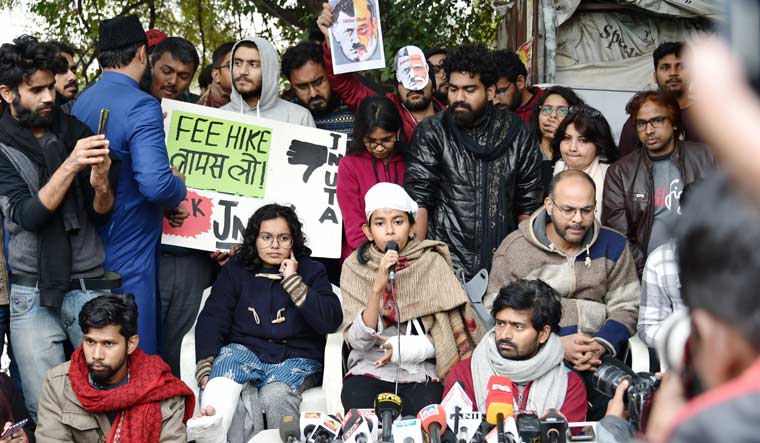 A day after a gang of armed, masked men went on a rampage in the Jawaharlal Nehru University campus—disrupting a peace march, barging into hostels and beating up students with rods and bricks—students and the teaching staff at the university limped back into action and reclaimed their voices with a series of press conferences.

For close to three hours on Sunday evening, some 100 men and women—alleged to be outsiders affiliated to the ABVP—unleashed mayhem in the campus which left an estimated 35 students and teachers injured, with JNU Students Union president Aishe Ghosh admitted to the AIIMS Trauma Centre with multiple wounds. She was allegedly heckled and barred outside the AIIMS, too, by goons before managing to enter the hospital. Prof Sucharita Sen of CSRD, who was brutally hit on the head, was among the several teachers who were injured.

The varsity campus had already been tense since January 4 over the issue of registration in the new semester. A few students had allegedly shut the Wifi to stymie the registration process which followed the hiked fee structure. Both the Left-controlled JNUSU and the RSS-affiliated ABVP traded allegations and counter-allegations over a series of scuffles and brawls leading up to Sunday evening's widespread violence. JNU has been on the boil for more than two months now, with protesting students demanding a complete rollback of the proposed hostel fee hike.

The ABVP on Monday held a press conference outside the JNU main gate where they pitched forward injured members of their union, including its presidential candidate Manish Jangid, to squarely put the blame on the JNUSU for the violence. "The mob which beat me up also had AISA's Satish Chandra Yadav. I remember seeing his face. Goons entered our hostels and identified us with names. There was partiality even in our treatment at AIIMS," claimed Jangid.

JNU Professor Atul Sood said: “I saw stones so big that it is difficult to hold them in your hand, and they (attackers) could throw it from that distance. This was an organised mafia group which was well-trained in creating the mayhem. And they knew how it would create panic. They ran behind us with everything in their hand. And there was only one principle they had in mind and that was to destroy everything that came their way. It was an organized attack by the JNU administration for reasons clearly known." Sood was caught in the middle of the Sunday violence following a 'peace march' led by  JNU teachers Association on the campus.

"We are not just looking for holding the perpetrators guilty; we want our campus to be safe. And this campus cannot be safe in the hands of this regime. We want a fair inquiry and a safe campus. And we want to quickly go back to teaching and learning  because that is the only thing we know how to do. The students are very keen to register. The students are very keen to give their examinations. The university has made a mockery of the registration process," said Sood, holding to account Vice-Chancellor Mamidala Jagadesh Kumar, who has not yet visited or reached out to any of the injured students and teachers.

A bandaged Aishe Ghosh fiercely held forth a media gathering at 5 pm on Monday outside the Sabarmati hostel which had thrown up chilling footage of students being attacked on Sunday, including a profusely bleeding Ghosh who was identified by the assailants and brutally sidelined by "30 men".

"Hammers were there in their hand. They continuously hit me on the head with an iron rod. They kept abusing me and my friends and said Yehi pein kut daley ge,” Ghosh said, adding that she had all the text and WhatsApp messages she sent earlier in the afternoon to the station house officer, sub-inspector and ACP on behalf of JNUSU alerting them to the presence of unidentified men on campus near the admin block.

On phone, the police had assured her that those unknown men had been taken off the campus. “Then how did a mob enter the campus again with iron rods at 6:30pm?,” she asked.

"Every iron rod used against the students will be given back by debate and discussion. JNU's culture will not be eroded anytime soon. JNU will uphold its democratic culture," she said.

The press conferences assimilated in a human chain led by students and teachers from the main gate to mark their renewed strength and unity. In the last three weeks, three major universities have seen violence and bloodshed on campus.