Khan has sought reports from the IB, Kannur University VC on the protests 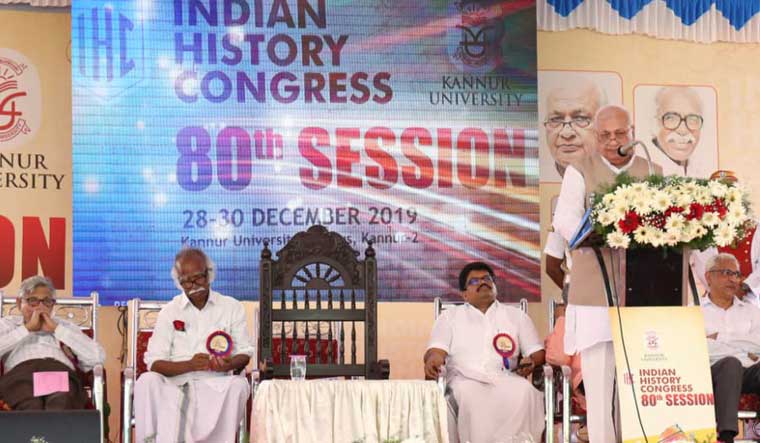 The rift between Kerala Governor Arif Mohammed Khan and the CPI(M)-led Left Democratic Front (LDF) government in the state is out in the open as the row over the protests at the Indian History Congress at Kannur University escalated.

The governor, in an exclusive interview to Manorama News, said that he would take strict action after receiving the reports.

Hitting back at Khan, CPI(M) state secretary Kodiyeri Balakrishnan said, "If the governor does not know the limitations of his position, he should resign and return to active politics."

With this, the political situation in Kerala has turned similar to that in West Bengal, where the Mamata Banerjee government and the governor are at loggerheads.

Khan also summoned Chief Secretary Tom Jose on Sunday and voiced his displeasure over the protests in Kannur. He also sought strict action.

The governor was forced to cut short his speech during the inaugural ceremony of the Indian History Congress on Saturday after protests erupted over his stand on the Citizenship (Amendment) Act (CAA).

Charges and counter-charges about protocol violations were also traded. There was protocol violation at the inaugural function of the Indian History Congress in Kannur, according to Khan, who had inaugurated the event.

Khan pointed out that a function attended by the governor should not last more than one hour. “However, for the first one-and-a-half hours, I patiently listened to historian Irfan Habib and another person who, incidentally, were not among the persons included in the initial list of dignitaries attending the inaugural function,” said the governor.

Khan said that he knew Habib from his student days at Aligarh Muslim University. “Habib never listens to any other viewpoint other than his own,” said the governor. The governor had also said Habib had pushed his ADC and security officer.

Meanwhile, Kannur University Vice-Chancellor Dr Gopinath Ravindran admitted that there was a breach of protocol in the protests held against the governor. Historian Irfan Habib's name was not there is the list of speakers at the inaugural session.

Khan also blamed the vice-chancellor of Kannur University for the incidents at the History Congress inauguration.

Pointing out that he had been inviting those protesting against CAA for a debate on the legislation, Khan said that nobody had responded so far. “I support CAA in its entirety. In fact, the act fulfils a wish of Mahatma Gandhi,” he said.

The governor advised the protesters opposing the Citizenship Act to follow constitutional values and the legal system. “Having taken the oath to protect the Constitution, I would have no option but to resign from the governor’s post in case I don’t support a law passed by the Parliament,” he said.

“On the other hand, it is my duty to defend the law if I agree with it,” added Khan, who made it clear that irresponsible statements cannot provoke him.

(This article originally appeared in onmanorama)