Cong calls for another 'independence movement' against Modi govt

'Country fighting against ideology it fought against during freedom struggle' 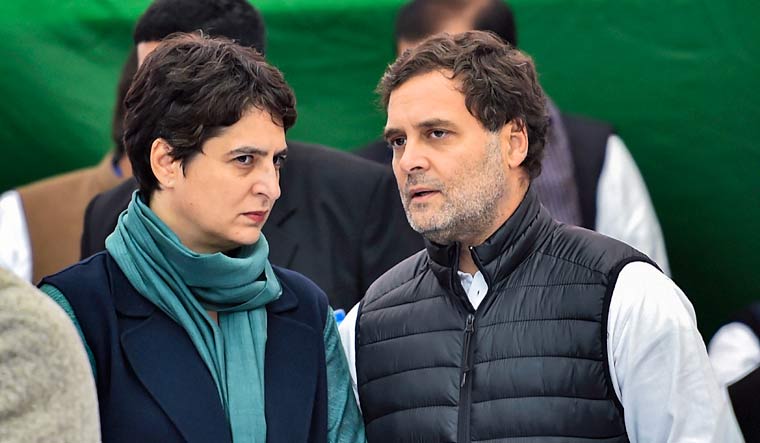 File: Congress leader Rahul Gandhi with Priyanka Gandhi during the 'satyagraha' demanding protection for the Constitution in the view of CAA and NRC, at Rajghat in New Delhi | PTI

Congress leaders in Gujarat on Saturday likened the Modi government with the erstwhile British rulers and called for the need to launch a "second independence movement" to dislodge the BJP-led dispensation.

They also called upon the need to work on transforming the country into the land that Mahatma Gandhi had dreamt of.

The Gujarat unit of the Congress took out a 'Save Constitution' flag march from Sabarmati Ashram to the statue of Sardar Vallabhbhai Patel in Usmanpura in the city to mark the party's foundation day.

Addressing the workers before the march, Satav said, "Under the BJP government (at the Centre), which has been in power since the last six years, the country seems to be going backwards. Prime Minister (Narendra Modi) does not respond to the questions on economic slowdown, unemployment, and farm distress, among others, affecting the people of the country."

"On our foundation day, we pledge to launch a fight for the second independence and work to once again make the country what Bapu (Mahatma Gandhi) had dreamt of," he said.

Satav said the Congress government fulfilled its pledge of farm loan waiver after coming to power in Rajasthan, Madhya Pradesh and Chhattisgarh.

"Even in Maharashtra, where the BJP could not keep together its political ally Shiv Sena, we waived Rs 2 lakh loan of farmers," he said.

"When it comes to spreading lies, the PM and the Home Minister cannot be challenged. Let us pledge to save the country from those spreading lies," he added.

Chavda alleged that the government was misusing constitutional bodies, dividing the country in the name of democracy, and trampling upon the constitutional rights of the people.

"The Congress worked in the government as well as in the opposition. But when it came to the country's unity, the party always rose above the political ideologies," he said.

"Whatever is happening in the country today is what had happened during the British Raj, when people's voice was suppressed through violence and injustice. It is time for the Congress to launch the second fight for independence," the Congress leader said.

"Rulers are bringing law that target people, suppress their voice. Politics is being played in the name of minority-majority. Congress workers will raise people's voice against the National Population Register (NPR) and to save the Constitution," he added.

Dhanani said Congress workers will have to take a pledge to save the Constitution of the country.

Country fighting against ideology it fought against during freedom struggle: Priyanka Gandhi

Virtually equating the ruling BJP government with the British, Congress general secretary Priyanka Gandhi Vadra on Saturday said that at present the country fighting an ideology which it had fought against during the freedom struggle.

"Today in the country, there are such powers in the government with whom we had a historical clash. We are at present fighting an ideology against which we had fought during the freedom struggle," she said here at the UP Congress headquarters.

Priyanka Gandhi was addressing party leaders during a programme held to mark the 135th Foundation Day of the Congress.

"Today the country is in trouble. If we do not raise our voice, we will be proved to be cowards," she added.