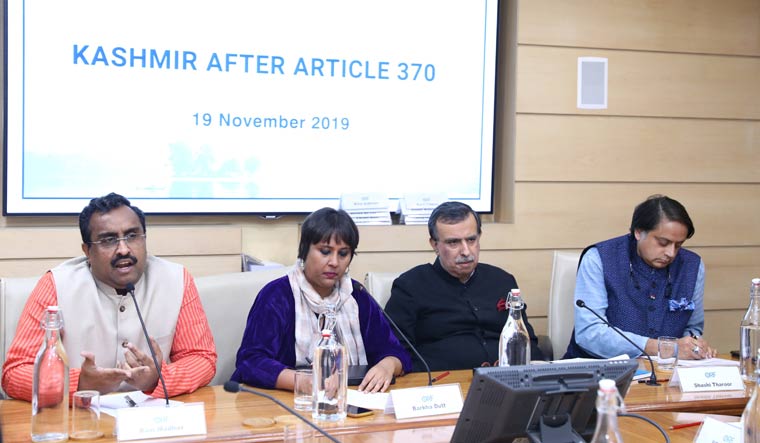 Advocating the resumption of political engagement in Jammu and Kashmir "sooner than later", senior BJP leader Ram Madhav on Tuesday said no "political class" was being nurtured from Delhi and politicians have to win the confidence of people of the newly created Union territory.

Speaking at a function in Delhi, Madhav, however, said the BJP was always in favour of emergence of a new leadership who are coming from the grassroots level of the Kashmir valley.

He also made it clear that "may be Omar Abdullah, may be Mehbooba Mufti, once they have the opportunity to come back and restore their political activity; I am sure they will definitely have a role to play in state politics".

Both Omar Abdullah and Mufti are under detention since August 5 when the Centre announced abrogation of Article 370 and split erstwhile Jammu and Kashmir state into two separate Union territories—Ladakh and Jammu and Kashmir.

The BJP leader, who is in charge of the party in the Union territory and also played an important role in forging an alliance with the PDP in 2015, said "sky is the limit" when it comes to demands from various quarters on the issue of Jammu and Kashmir but emphasised that the demands should be within the ambit of the Constitution.

On questions of creation of a new political class, Madhav said, "Let me clarify on the question of new political class being nurtured or cultivated from Delhi. No such thing is happening from our side. We have huge respect for all the leaders of different political parties in the valley. I said it earlier, that (at) the earliest possible opportunity, they will resume their political activity."

Elaborating further, Madhav said nobody can create political leaders as they have to win the confidence of the people.

Observing that emergence of a newer leadership is a continuous process, Madhav said the BJP is in favour of new leaders coming up from the grassroots level.

He said the decision on opening up of the "political space" in Jammu and Kashmir will be taken by the Union territory's administration and the Central government.

Madhav said he was "personally in favour of, at least now that almost 100 days have passed since the decision was taken, some kind of a political engagement to start in the valley".

"I am talking about it (beginning political engagement in the valley) in my party also. Hopefully, we will be able to do something about it," said Madhav, the BJP's national general secretary, adding that normal political activities have been going on in Jammu.

To a question about what prevents the government from releasing political leaders in Kashmir from preventive custody, Madhav said whether the government states its position or not, "there is no doubt" that the day these leaders are out, they will lead protests.

"We will also have to ensure that those protests need to be democratic and peaceful. That is expected. Nobody says there should not be any protest. It is a democracy, protests will be there," Madhav said.

Refusing to speculate about what could be the plans of the security establishment in Delhi or in Srinagar in this regard, Madhav said,"engagement at political levels needs to be resumed sooner than later".

Mainstream leaders in the valley, including three former chief ministers of Jammu and Kashmir, were taken into preventive custody in the wake of the Centre's August 5 decision to revoke the special status of the state.

While Omar Abdullah and Mufti remain detained away from their homes, three-time chief minister Farooq Abdullah has been detained at his house under the controversial Public Safety Act since September 17.

Madhav said the erstwhile state of Jammu and Kashmir has a undergone major transformation since the abrogation of Article 370.

"So new kind of political activities will resume whenever the first opportunity comes. I am very keen that opportunity should come as soon as possible," he said, addressing a discussion on 'Kashmir After 370' organised by think tank Observer Research Foundation.

"So that kind of political space should be made available to people of Jammu and Kashmir, that's my firm conviction. How early it can happen is for the administration in Jammu and Kashmir and the government in Delhi to decide together," Madhav suggested.

Participating in the dialogue, senior Congress leader and MP Shashi Tharoor questioned the preventive detention of political leaders in Kashmir.

"It certainly raises a question: What is the yardstick you are waiting for? Because, remember, there were no objective disturbances that prompted the arrest in the first place," he said.

Tharoor said the number of protests the leaders could engineer whenever they are released, whether it is three months from now or if they were released three months ago, will be the same.

"So ultimately the logic has never been understood by many of us as to why to detain them in the first place," Tharoor said, adding, "I am at a loss to figure out on what objective basis can we say now the conditions have arrived for the release because the conditions are in entirely your (government) own control.”

"What happened in August and thereafter has done us a great deal of damage internationally... It would require tremendous efforts for us to regain our lost ground. The ground we have lost is very severe," Tharoor said.

Countering him, Madhav said only around 200 political leaders are in detention.

"Are we trying to say that in entire Kashmir there are those 200 leaders. No? There are many more outside. There needs to be political activism," the BJP leader added.