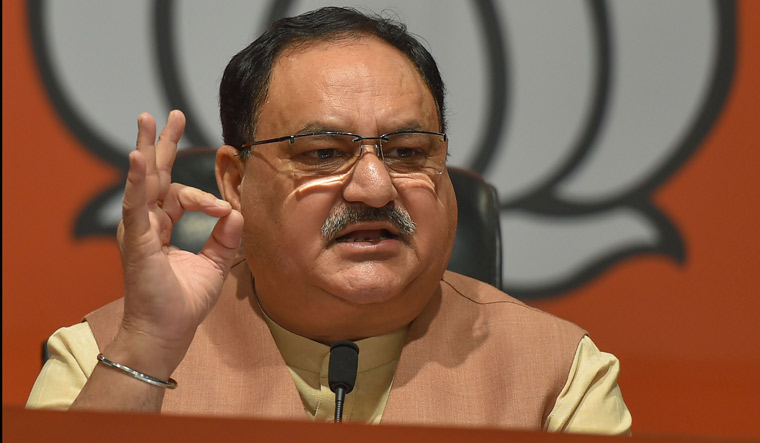 BJP working president JP Nadda on Friday asked party functionaries to expose the "blatant lie" of Congress leaders over the Rafale deal that has hurt the country's image abroad.

At a meeting with party leaders here, he asked them to go to people and "expose" the Congress's "slander campaign" against the government.

Nadda also advised party leaders to reach out to people and take important achievements of the BJP government like the abrogation of Article 370 provisions in Jammu and Kashmir to them, which he said had not been given prominence by the media.

"You need to tell people how 106 laws which could not be implemented in Jammu and Kashmir due to the existence of Article 370 had come into force there after the abrogation of its provisions. You need to tell people how the party had performed well in Panchayat BDC polls in Jammu and Kashmir, winning 81 out of a total of 300 seats, besides putting up a great show in terrorist hotbeds like Shopian, Kupwara and Srinagar," he told the meeting.

"BJP will hold demonstrations at all the district headquarters in Uttarakhand, as in the rest of the country tomorrow to demand the apology of Rahul Gandhi for lying to the country on the Rafale deal," party leader Shyam Jaju, who is in-charge of the party affairs in Uttarakhand told reporters after coming out of the meeting.

He asked party workers to identify such refugees in their area and make them fill a form which is a necessary formality for getting their names in the NRC by 2021 and an Indian citizenship.

Nadda who visited the state for the first time after being made national working president held a series of meetings with state BJP office bearers, MLAs, booth presidents and the party's core group at different venues.

The meetings were not open to the media but party leaders who attended them said Nadda congratulated BJP workers for its good performance in the recently-concluded panchayat elections in Uttarakhand, besides giving them suggestions on how to reach out to people and serve them effectively.

Earlier, Nadda was accorded a warm welcome by party workers right from the Jolly Grant airport to the party office at Balbir Road in Dehradun.

Party workers lined up along either side of the road at Doiwala, Rispana and Nehru Colony fountain Chawk to greet him as he arrived in an open jeep, accompanied by Chief Minister Trivendra Singh Rawat and BJP state chief Ajay Bhatt.