Here's how Modi, Shah reacted to the Ayodhya verdict 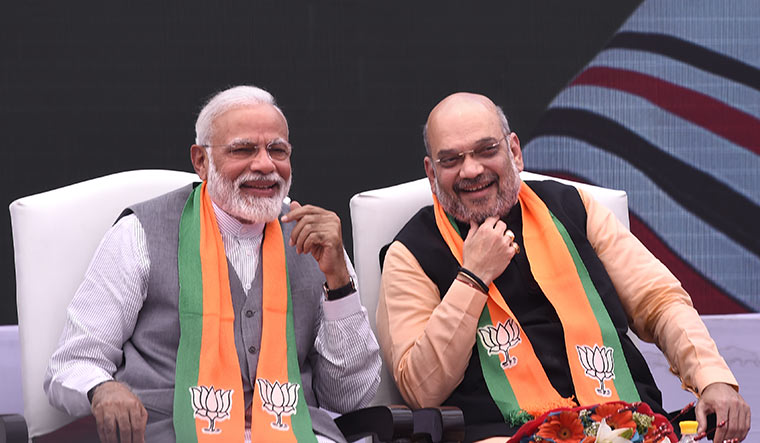 Leading from the front: The lack of opposition unity has come as a boon for Modi and Shah | Getty Images

In a historic verdict of sorts, the Supreme Court announced that the disputed land at Ayodhya must be given to a trust for construction of a Ram temple and ordered  that the Sunni Waqf Board be given five acres of alternate land. SC also said the verdict could not be based on religious sentiments and that it has reached a conclusion as per law.

PM Narendra Modi and Home Minister Amit Shah reacted to the Ayodhya land verdict in a series of tweets. Here's what they had to say.

Both leaders termed the verdict to be a testament to the peaceful coexistence and religious tolerance our country stands for. Shah also expressed gratitude towards the Sant Samaj and the countless people who strived hard towards the verdict for the support.

"The calm and peace maintained by 130 crore Indians in the run-up to today’s verdict manifests India’s inherent commitment to peaceful coexistence."

"May this very spirit of unity and togetherness power the development trajectory of our nation. May every Indian be empowered."

"The halls of justice have amicably concluded a matter going on for decades. Every side, every point of view was given adequate time and opportunity to express differing points of view. This verdict will further increase people’s faith in judicial processes."

"SC’s Ayodhya Judgment is notable because:

It highlights that any dispute can be amicably solved in the spirit of due process of law.

It reaffirms the independence, transparency and farsightedness of our judiciary.

It clearly illustrates everybody is equal before the law."

"The Honourable Supreme Court has given its verdict on the Ayodhya issue. This verdict shouldn’t be seen as a win or loss for anybody. "

Home Minister Amit Shah tweeted in Hindi. Those roughly trasnlate to: The decision taken by the Supreme court on the Ayodhya case is a historical one and is viewed to be a milestone and stands for India's unity, secularity and its culture.  He also expressed his gratitude towards the Sant Samaj, the numerous indivisuals of the nation who have strived hard to achieve this result for many years.

The dispute that has been going on for years, has finally resulted in this verdict, for which I thank the judicial system of India and all justices. Finally, he also appealed that all communities and people belonging to all religions should accept the verdict with grace, understanding and maintain peace to uphold integrity and unity of the country.