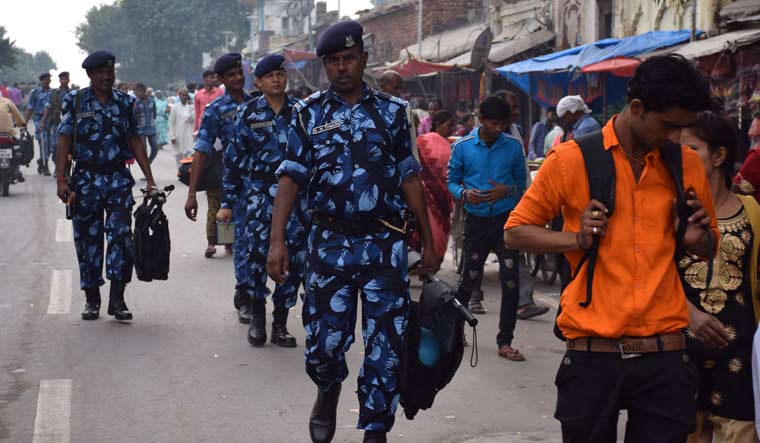 Multi-layered security arrangements have been put in place in the temple town of Ayodhya with drones being used to monitor the situation ahead of the apex court judgment in the Ram Janmabhoomi-Babri Masjid land dispute case.

Elaborating on the security arrangements, Additional Director General of Police (Law and Order) P.V. Ramasastry said, "Adequate forces have been provided to Ayodhya and all sensitive districts of the state in good measure. The force has been sufficiently strengthened in terms of CAPF and PAC companies."

He said not only their number had been increased but the efficiency of the deployed forces was also being improved for the past two months by giving them better equipment and training.

Apart from this, senior officers were also involved in planning, he said. When asked whether drone cameras will be used for monitoring purposes, Ramasastry said, "Drone cameras are being used in the preparatory phase so that the deployment of the forces can be planned correctly."

He said drone cameras would also be used to closely monitor vulnerable spots and rooftops to prevent the accumulation of stones.

"For the past a couple of months, efforts have been made to increase effectiveness and efficiency of the security personnel," he said.

When asked on the possibility of deploying the NSG, the ADG said, "Not any. The NSG is available at their bases for any eventuality. We have deployed ATS units, bomb diffusion squads, anti-sabotage and quick response teams."

He informed that for more than a month, police had been trying to build confidence among people.

"Stress has been laid on confidence-building measures," he said, adding that police had undertaken patrolling and different sections of society, be it the dharma gurus, traders or academics had been contacted.

"The basic aim of the outreach is to instil a feeling of security," he said.

Speaking on security arrangements, ADG (Prosecution) Ashutosh Pandey said, "Sixty companies of the PAC and paramilitary forces have been deployed. As many as 10 drone cameras and CCTVs at 30 crossings have been installed."

Pandey said barricading had been strengthened at the place of the makeshift temple.

The entire town had been divided into 31 sectors and 35 sub-sectors, he said, adding that in case there was a surge of visitors, a "holding area" had been carved on the outskirts of the town so that people could be sent in batches for the darshan of Lord Ram.

Pandey said there was no ban on devotees coming to Ayodhya.

Uttar Pradesh Chief Minister Yogi Adityanath had earlier said two helicopters would be on standby in Lucknow and Ayodhya as part of the security arrangements.

Adityanath conveyed this during a late night videoconference with the state's top civil and police officials.

Helicopters would be used in case of an emergency, an official said.

An official release later said the chief minister reviewed the law and order situation in each district and gave necessary directions to ensure normalcy.

It was also decided that a state-level control room will be set up in Lucknow.

Every district would have a control room, the release said. Adityanath warned that strict action would be taken against those trying to disturb the law and order.

The apex court is likely to deliver its verdict on the Ayodhya title suit before November 17.