ECPA has banned construction till Nov 5, crackers in winter session 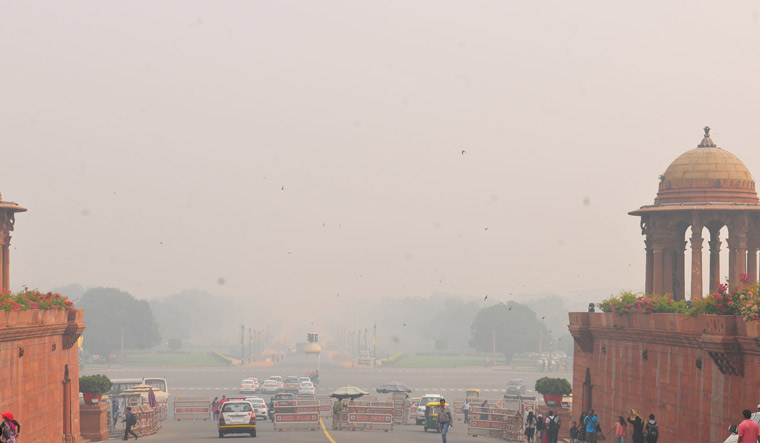 A Supreme Court-mandated panel on Friday declared a public health emergency in the Delhi-NCR region and banned construction activity till November 5.

As the pollution levels in the region entered the "severe plus" category, the Environment Pollution (Prevention and Control) Authority also banned the bursting of crackers during the winter season.

In a letter to chief secretaries of Delhi, Haryana, Rajasthan and Uttar Pradesh, EPCA Chairman Bhure Lal said, "The air quality in Delhi and NCR deteriorated further last night and is now at the severe plus level. We have to take this as a public heath emergency as it will have adverse health impacts on all, particularly our children."

Under these circumstances, he said, construction activities, hot-mix plants and stone crushers in Delhi, Faridabad, Gurugram, Ghaziabad, Noida and Greater Noida will remain closed till morning of November 5.

The blanket of haze over Delhi thickened on Friday morning with the national capital's pollution levels increasing overnight.

Earlier, the EPCA had banned construction activities only for the period between 6pm and 10am till November 2. Now, no construction can take place even in daytime.

EPCA directed that all coal and other fuel-based industries, which have not shifted to natural gas or agro-residue, will remain shut in Faridabad, Gurugram, Ghaziabad, Noida, Bahadurgarh, Bhiwadi, Greater Noida, Sonepat and Panipat till the morning of November 5.

In Delhi, industries, which have not yet shifted to piped natural gas, will not operate during the period, it said.

"Cracker burning is completely banned for the entire winter period. We note that there are festivals coming and given the experience of Diwali, when in spite of all efforts, cracker burning was extremely high and led to accumulation of toxins in the air, this measure is needed," Bhure Lal said.

He also said that it is imperative that implementing agencies take urgent steps to stop local sources of pollution, as this will only add to the already polluted air.

"This requires stringent vigilance and punitive action against all cases of local pollution, from plastic and garbage burning to dust pollution. I am also constrained to say that in spite of all our efforts, there are still many instances of local pollution and therefore, enforcement needs to be stepped up further," he said.