'India was never a Hindu rashtra, will never be one': Owaisi slams Bhagwat

Bhagwat said that Muslims, others are happy in India thanks to Hindu culture 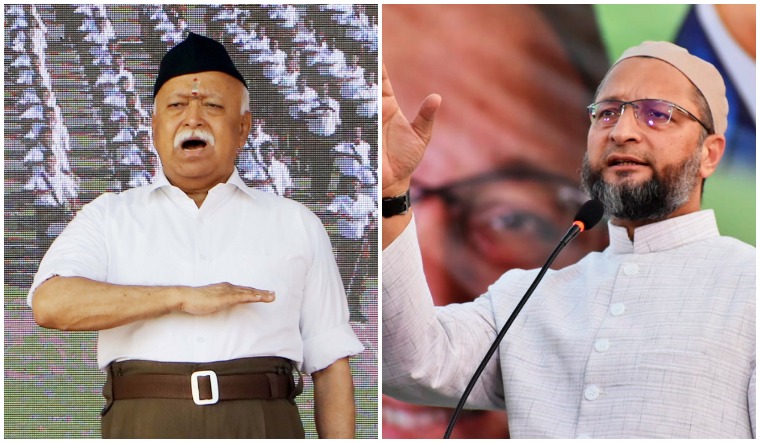 All India Majlis-e-Ittehadul Muslimeen (AIMIM) chief Asaduddin Owaisi slammed Rashtriya Swayamsevak Sangh (RSS) chief Mohan Bhagwat over his remarks that Muslims were happy in India only because of Hindu culture, and that India was a Hindu rashtra.

Addressing a meeting of intellectuals in Bhubaneswar yesterday, Bhagwat had said that 'Hindu' is the culture of all those who live in India, and that it accepts and respects diverse cultures. “When any nation has deviated from the right path, it has come to us in search of truth,” he had said. “When Jews were wandering, India was the only nation where they got shelter. The Parsis practise their religion freely only in India. The happiest Muslims are found in India. Why is it so? Because we are Hindus, and it is a Hindu rashtra,” Bhagwat had said.

Reacting to the remarks, Owaisi tweeted that Bhagwat could not erase his history in India and said that Muslim culture and faith cannot be “subsumed by Hinduism”.

"Bhagwat cannot erase my history in India by renaming it Hindu’. It won’t work. He cannot insist that our cultures, faiths, creeds & individual identities all be subsumed by Hinduism," Owaisi said in the tweet.

He added that the measure of Indian Muslims' happiness is the Constitution, and not the “magnanimity of majority”.

“No matter how hard Bhagwat tries to link us to foreign Muslims, it will not reduce my Indianness. Hindu Rashtra=Hindu Supremacy. That is unacceptable to us

The measure of whether we’re happy or not is the Constitution, not the magnanimity of majority,” Owaisi said in another tweet.

Last week, too, Owaisi had hit out against Bhagwat for his remark that the term 'lynching' was a “western construct” and should not be used in the Indian context or to defame India.

He said the word 'lynching' does not originate from Indian ethos but comes from a separate religious text.

Reacting sharply to Bhagwat's statement, Owaisi said Muslims, Dalits and even Hindus have been victims of incidents of mob-lynching in the country.

"Are these incidents not mob-lynching?" he asked.

Referring to the 1984 anti-Sikh riots in New Delhi after assassination of then Prime Minister Indira Gandhi, he said they were also incidents of mob-lynching.

Referring to the 2002 Gujarat riots, Owaisi said they were also examples of mob lynching and occurred when Narendra Modi was chief minister of the state.

Owaisi had also lashed out at Bhagwat's statement that the RSS is firm on its vision that "Bharat is a Hindu Rashtra".