A school teacher, his pregnant wife and 8-year-old son were found dead in their house 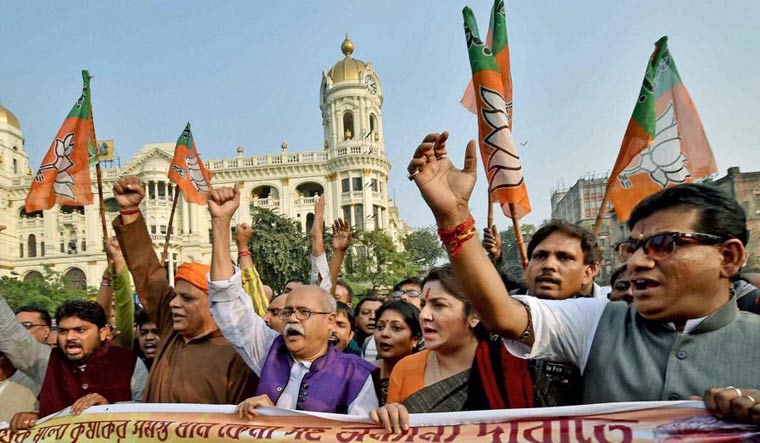 The gruesome triple murder of a school teacher and his family in Murshidabad district took on a political colour on Thursday with the BJP targeting the Mamata Banerjee government over the killings and its ideological mentor RSS claiming the teacher was their supporter.

The BJP and the RSS said though the primary school teacher Bandhu Gopal Pal was not their active member, but at times he participated in the weekly 'milan' programmes organised by the Sangh.

The 35-year-old teacher, his pregnant wife Beauty and 8-year-old son Angan were found lying in pools of blood in their house at Jiaganj in Murshidabad on Tuesday when the Durga Puja festivities were on.

The three were murdered by unidentified miscreants, police said on Wednesday.

"What can be more heinous than this? RSS worker Bandhu Prakash Pal, his pregnant wife and their eight-year-old child were brutally killed in Murshidabad. How can law and order of a state be considered good when the life of a common man is not safe? What is happening 'didi' in your rule," BJP general secretary Kailash Vijaywargiya said in a tweet.

Vijaywargiya is in charge of his party's affairs in Bengal.

The ruling Trinamool Congress declined to make any comment on the issue as the matter is under investigation.

On Wednesday, he referred to the killing of two BJP workers and alleged the involvement of TMC workers.

This is a clean indication of the collapse of law and order in the state, he had alleged.

BJP national spokesperson Sambit Patra shared on Twitter a video of a house in which blood stains could be seen on the floor.

"Warning : Gruesome video. This has shaken my conscience ... a RSS worker Sh Bandhu Prakash Pal, his eight months pregnant wife &amp; his kid were brutally slaughtered in West Bengals Murshidabad. Not a word by the liberals. Not a letter by 59 liberals to Mamata. Nauseating Selectivism!," he said in the tweet accompanying the video.

Forty-nine eminent personalities from across the country had written to Prime Minister Narendra Modi in July this year to take action against incidents of mob lynching in the country.

Police have started investigating the Murshidabad incident and three persons have been detained.

According to locals, the Pal family had moved to Jiaganj around five years ago.

A police officer said prima facie it appears the Pal family was murdered by unidentified miscreants on Monday night. When area residents did not see them at the local community puja pandal on Vijayadashami on Tuesday, they went to Pal's residence and found the door bolted from inside.

They then informed police, who broke open the door and found the three bodies, he added.