Will soar high if Pakistan stoops low, Indian envoy on UNGA and Kashmir 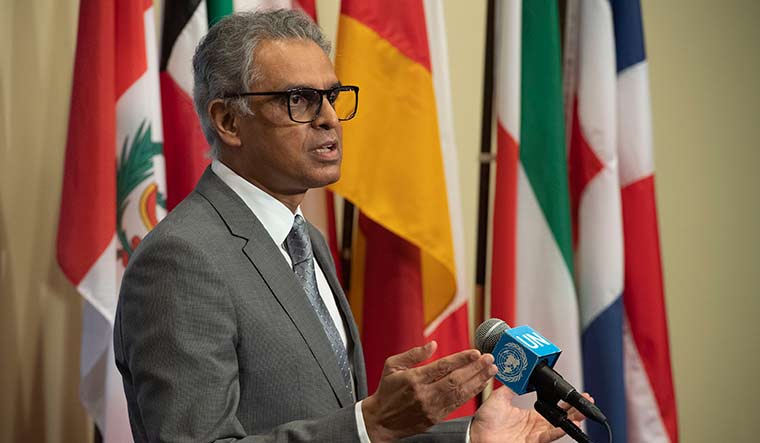 Man of the moment: Ambassador Syed Akbaruddin briefs the media following Security Council consultations on Kashmir. He led India’s efforts to neutralise the Sino-Pak attempt to hold a formal Council session on the issue.

India will soar high if Pakistan "stoops low" by raising the Kashmir issue at a high-level UN General Assembly session here next week, India's top envoy to the United Nations has asserted, warning that Islamabad may want to mainstream hate speech after normalising terrorism in the past.

Pakistan Foreign Minister Shah Mahmood Qureshi has said Prime Minister Khan will "forcefully" raise the issue before the international community during his address to the UNGA.

Earlier, Suriname's vice president Michael Ashwin Adhin had said there is a possibility that the issue of abrogation of special status to Jammu and Kashmir could be raised on the margins of the UN general assembly.

He, however, asserted that Suriname believes in dialogue but "does not promote interference" in internal affairs of other countries.

India's Permanent Representative to the UN Ambassador Syed Akbaruddin was asked whether he expected the Kashmir issue to come up during the UN General Assembly session, and, if so, how will India tackle it.

"What you're telling me is that it will be more of the same, much more of the same from the side of one country. If that is so what is our response? So let me put it this way. That it is for every country to determine its trajectory of how it wants to approach global platforms. There may be some who stoop low. Our response to them is we soar high. They may stoop low, we soar high," he said.

"We are confident that we will soar. We have given you examples of how we will not stoop. We will soar when they stoop low," he said.

Akbaruddin also laid out the focus and priorities of Prime Minister Modi when he arrives for the 74th UN General Assembly session.

He said a plethora of plurilateral and bilateral engagements and meetings of the Prime Minister outline the examples of how India will soar higher.

Pakistan has been trying to internationalise the Kashmir issue but India has asserted that the abrogation of Article 370 was its "internal matter". New Delhi has also asked Islamabad to accept the reality and stop its anti-India rhetoric.