The BJP claimed that anarchy is reigning in MP, with a total collapse of law, order 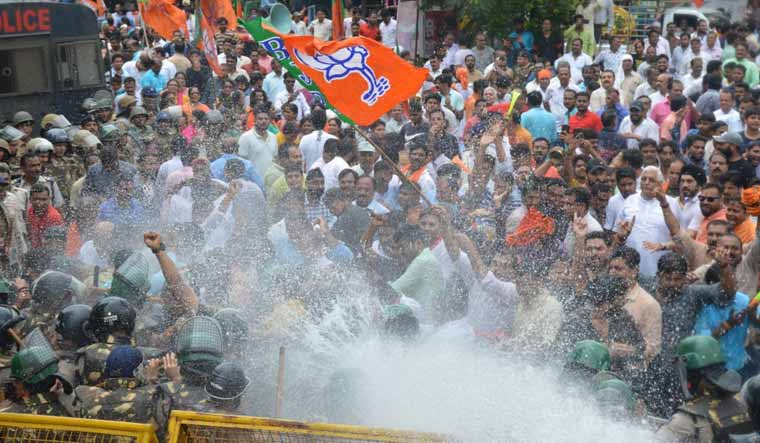 The opposition BJP in Madhya Pradesh held simultaneous 'ghantaanad' demonstrations on Wednesday in all the district headquarters in the state, ringing bells, blowing whistles and playing other traditional percussion instruments as a symbolic way to “wake the government that is asleep to welfare of people”.

Senior leaders of the party, Members of Parliament and other people's representatives led the agitation in different districts, holding demonstrations before the district collectorates. They raised the slogan of Madhya Pradesh Bachao, Congress Sarkar Bhagao (save MP, throw out Congress government).

In Jabalpur, leader of opposition Gopal Bhargava led the agitation and courted arrest with several BJP workers. The police had to use water cannons to control the agitating BJP members.

The BJP claimed that anarchy is reigning in Madhya Pradesh, with a total collapse of law and order. “Farmers are flustered as they have been cheated in the name of loan waiver. Governance has been totally hit by repeated transfers of officials and no attention is being paid to resolving issues of people,” the BJP asserted.

Hitting back, the Congress said that the BJP has no moral right to question the government, though it has the constitutional right to do so. Addressing a press conference, chief of Congress media cell Shobha Oza said that the BJP should constructively criticise the welfare steps taken by the government. “Our government needs constructive suggestions and criticisms as much as appreciation for the constant steps it is taking for development of MP and progress of its people,” Oza said.