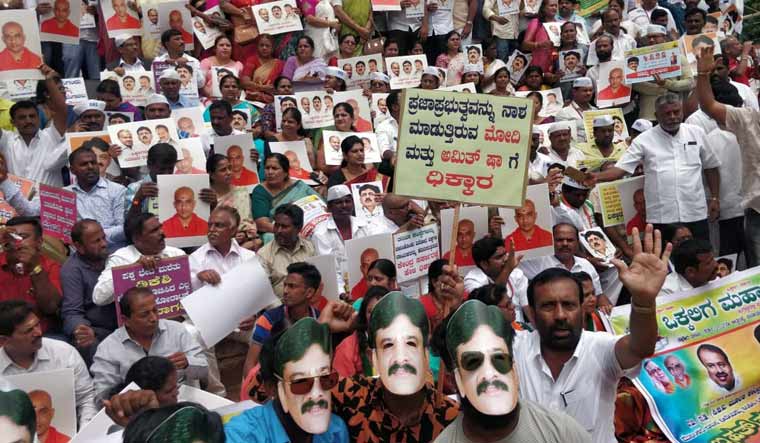 Bengaluru city came to a standstill as thousands of supporters of Karnataka Congress leader D.K. Shivakumar, who is currently in Enforcement Directorate custody over alleged money-laundering case, took to streets to protest his arrest.

People affiliated to the Congress and various Vokkaliga organisations gathered at the National College Ground and held a protest march to Freedom Park. The protesters, including politicians and seers, came to Bengaluru from Ramanagara, Kanakapura and Bengaluru Rural to express solidarity with the arrested Congress leader.

Traffic diversions were in place in order to ensure that the movement of vehicles were not affected by the protest march. However, traffic snarls were reported from Basavanagudi, Mysuru Road, Jayanagara, J.C. Road, Majestic and other roads around National College.

According to an Indian Express report, Home Minister Basavaraj Bommai said the protest is being held smoothly without any untoward incidents.

Earlier, Shivakumar had thanked party leaders and supporters for standing behind him and urged them to hold a peaceful protest and not cause any inconvenience to common people.

"I would like to reiterate that I have done nothing wrong & am a target of vendetta politics. With the support and blessings that I am receiving from all of you, and my belief in God and our judiciary, I have full faith that I will emerge victorious both legally and politically (sic)," a tweet from Shivakumar's Twitter handle read.