Ka-226T: Why Putin personally promoted this helicopter to Modi 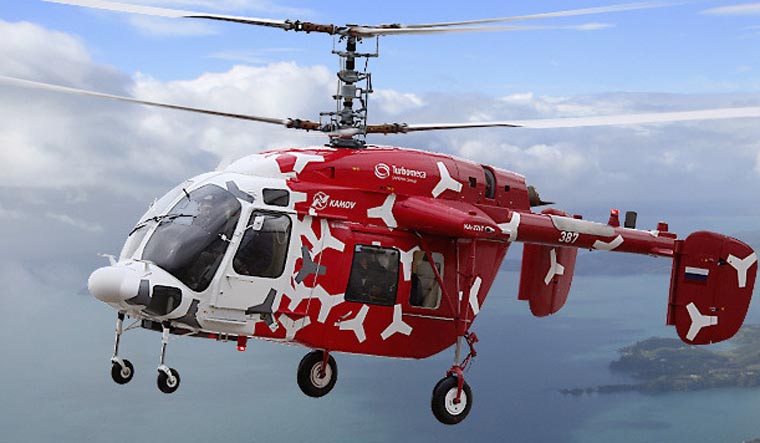 Putin was quoted by Russian state-run news agency TASS as explaining to Prime Minister Narendra Modi the capabilities of the Kamov Ka-226T utility helicopter. India and Russia had signed an intergovernmental agreement in 2015 to sell New Delhi 200 Ka-226T helicopters, but a firm contract is yet to be inked. The contract for the 200 Ka-226T helicopters is estimated to be worth $1 billion. Putin and Modi inspected a Ka-226T that was flown to Vladivostok where the leaders had arrived for the Eastern Economic Forum summit. Putin was quoted by TASS as telling Modi, “I flew on this helicopter, I liked it, it’s really comfortable. It’s good because it has coaxial rotors, there is no back rotor, so it is good with lateral wind pressure in the mountains and over the sea.”

The Ka-226T is a design of Russia's famed Kamov design bureau. It is a light helicopter, with a maximum take-off weight of over 3.5 tonnes and can carry a payload of up to 1 ton. Like previous Kamov designs, such as the Ka-25 and Ka-27 anti-submarine warfare helicopters and the Ka-52 attack helicopter, the Ka-226T uses coaxial rotors—that is, it has two sets of rotors mounted one on top of the other and typically no tail rotor.

Coaxial rotors give a helicopter improvements in lift and payload capacity over conventional choppers. This is especially advantageous in high-altitude environments such as the Himalayas where an aircraft's performance at take-off tends to diminish due to the lower air density. The Indian Navy has been using the Ka-25 and Ka-27 and also the Ka-31 airborne early-warning helicopter for several years.

The Ka-226T also has a unique, detachable 'mission' compartment instead of a conventional cabin. This allows the helicopter to be adapted for different roles such as surveillance and cargo delivery. The Ka-226T uses a French-designed engine, which is more powerful than the engine on the original Ka-226. The Ka-226T deal is considered vital for the Indian Army and Air Force as the aircraft is slated to replace the ageing Chetak and Cheetah light helicopters, which are based on 1960s-era French designs.

India agreed to purchase the Ka-226T in 2015, selecting the type over offerings from European giant Airbus. The original plan was to build a total of 60 helicopters in Russia and 140 under licence in India.

Progress in negotiations has been slow. Russian Helicopters, the manufacturer of the Ka-226T, will manufacture the helicopter in India under a joint venture with HAL. At the Aero India airshow in February, Russian Helicopters signed MoUs with five private Indian companies for supply of parts for fuselage, rotor blades, radio equipment and landing gear for the Ka-226T.

In late August, The Hindu reported Russian Helicopters was anticipating a contract with India and had “started setting up a manufacturing line and the first Ka-226T was expected to be ready by end 2020”.

Interestingly, Putin's reference to the performance of the Ka-226T “over the sea” appears to be an attempt to promote the Ka-226T for an Indian Navy requirement to buy 111 light utility helicopters. In the event the Ka-226T is selected by the Indian Navy also, it would become the 'tri-services' successor to the Chetak and Cheetah.