The Kerala BJP is unhappy with P. Sathasivam's cordial relations with Pinarayi govt 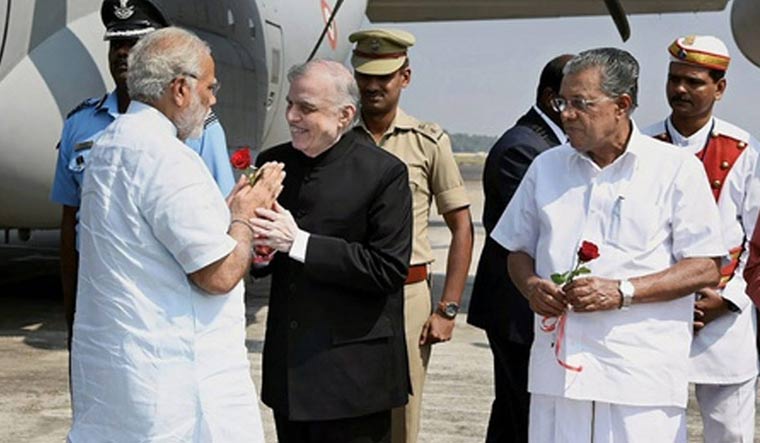 MP Nalin Kumar Kateel was just about to leave a BJP meeting in Kochi on Tuesday when he learned that he had just been promoted as the successor of B.S. Yediyurappa in the post of the saffron party's president in Karnataka.

Kateel had been entrusted the role of monitoring the affairs of the BJP Kerala unit along with B.L. Santosh, who was also promoted as the party general secretary. These elevations would require the party to pick two national-level leaders to oversee matters in Kerala. Yet the Sangh Parivar echelons are more interested in another soon-to-be vacant position—the post of state governor.

Justice P. Sathasivam's tenure as Kerala governor is scheduled to end on September 5. He could get an extended term or he might be asked to continue until a successor is appointed. The choice of the new governor is a hotly debated topic in Kerala politics.

The office of governor has never been this important in Kerala. The post is widely seen as a vital pivot for the BJP to wield its influence in a state, which had royally snubbed it in elections. The party that rules the Centre could opt for a strong leader as governor to drive its agenda in the elusive state.

The Centre could wait for a few days before appointing a new governor. Still, Kerala could get a new governor without delay, judging by the recent pattern of governor appointments. Gujarat governor O.P. Kohli's successor was appointed the very next day after his retirement. The Centre did not take much time in appointing new governors for Chhattisgarh, Andhra Pradesh, Uttar Pradesh, Himachal Pradesh, West Bengal and Tripura.

Sathasivam is the first Supreme Court judge to be appointed as governor. He brought the office closer to the people. The BJP leadership in the state, however, was not amused by his style of functioning. They thought he took the trouble of maintaining good relations with the government and the opposition.

If that happens, Kerala may be heading for an administrative crisis. A governor can create hurdles for the state government as the head of the government and as a representative of the Centre who is required to send out frequent reports to New Delhi.

The CPI(M) central committee had reminded Kerala that the Central government could manipulate constitutional institutions and and use them to its advantage. In fact, there were rumours floating around about Sathasivam's possible replacement by hardline BJP leaders such as Kalyan Singh or Uma Bharti. Singh was later sent to Rajasthan as governor.

Speaking of governors, Kummanam Rajasekharan is yet to find a job after resigning as the Mizoram governor to unsuccessfully contest against Shashi Tharoor in Thiruvananthapuram in the recent general election. Though Kummanam has maintained that he was not after high offices, party leaders suggested that the central leadership has taken note of the fact that he was without any post in the party or the government.

Union Minister V. Muraleedharan does not seem to be interested in the daily grind of party affairs in the state. He wants to focus on administrative decisions that could benefit the BJP in the state. His rival in the Kerala BJP, P.K. Krishna Das, is also busy in Andhra Pradesh to canvass Congress leaders to the BJP. Even working president J.P. Nadda has lobbied in the state.

The BJP in Kerala is focused on expanding its membership in the state. State president P.S. Sreedharan Pillai has also claimed credit for bringing in some Muslim leaders to the party fold in the Malabar region. The party is headed for an organisational overhaul in December but the leaders are more concerned about the new governor.