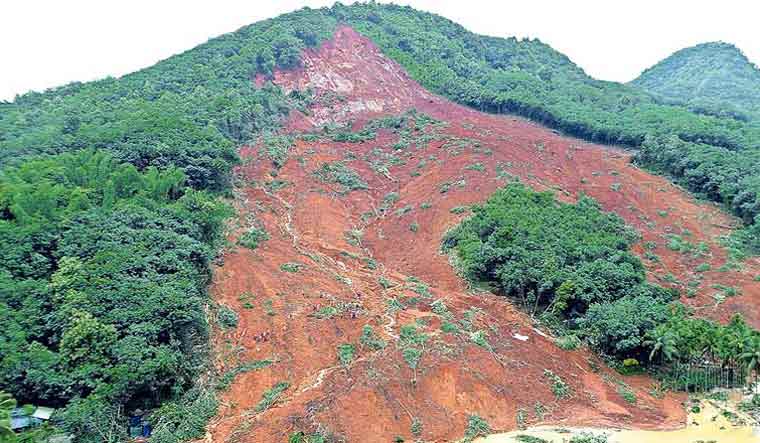 Kavalappara near Nilambur in Malappuram district of Kerala

It seems that the ban on mining and quarrying imposed by the Kerala government following the deadly landslides at Puthumala in Wayanad and Kavalappara in Nilambur was an eyewash. Pointing out that the state has not received extremely heavy rains over the last few days, the Mining and Geology Department has lifted all the curbs.

The ban was earlier imposed based on an alert issued by the Kerala State Disaster Management Authority. However, with the state experiencing poor rainfall now, the authority has withdrawn the warning, following which the government removed the restrictions.

The ban had covered all activities related to removal of natural substances including ordinary soil for house construction.

The latest order issued by Mining and Geology Director K Bjiu IAS says that the restrictions were being revoked as extremely intense rainfall is no longer being witnessed and the level of soil moisture has decreased. All quarry owners have received a copy of the order. However, the ban would be in force at places where the respective district collectors have issued directives in this regard.

There are around 750 licenced quarries in Kerala - over the last one year, permission was granted to start 129 more. According to Mining and Geology officials, restrictions on quarries which have already received environmental clearance would invite court intervention.

Ground Penetrating Radars were put into use on Sunday to locate bodies at Kavalappara in Malappuram and Puthumala in Wayanad, where massive landslides had wiped out two villages, even as the toll in rain battered Kerala climbed to over 140 with the retrieval of more bodies.

A team of experts from Hyderabad started the search operations at the two villages with GPR, which will help detect bodies buried under mounds of earth.

As per a government update, 58 people have so far lost their lives in Malappuram, 12 in Wayanad and 17 in Kozhikode, the three northern districts, where 21 people are still missing.

It also said that 1,789 houses were fully damaged in the monsoon.

Meanwhile, over one lakh volunteers have enrolled for cleaning work in flood-hit villages in the northern districts.