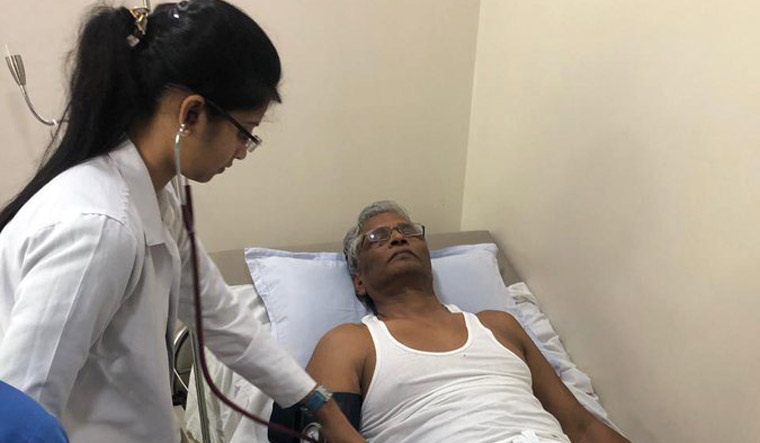 Shrimant Patil being examined in a hospital | Twitter handle of ANI

A Congress leader from Maharashtra, Yashomati Thakur, has alleged she was stopped by the police from meeting her party's Karnataka MLA Shrimant Patil, who is undergoing treatment at St George Hospital in south Mumbai.

According to ANI, Thakur claimed Patil was being treated for purported cardiac problems in a hospital that didn't have a cardiac unit. A video of Thakur confronting police personnel and hospital staff has emerged, showing her accusing them of taking bribes to prevent access to Patil.

Patil was admitted to the government-run hospital after he complained of chest pain on Thursday—the day when Karnataka Chief Minister H.D. Kumaraswamy moved a confidence motion in the Assembly.

Thakur, who is All India Congress Committee secretary in-charge for Karnataka, said the police deployed at the hospital stopped her from meeting Patil on Friday night.

"We helped him (Patil) during the Karnataka Assembly elections (held in 2018). So, I wanted to see him at the hospital. But the police stopped me from meeting him at the behest of the state government," Thakur said.

She added that Patil's son Shreenivas was present when she visited the hospital.

"He (Shreenivas), too, was against me meeting his father. He was the one who coordinated the election preparation with us during the Karnataka polls," she added.

Politics in Karnataka has witnessed a dramatic turn of events over the past few weeks with the BJP claiming the ruling Congress-JD(S) combine lacks numbers to prove its majority on the floor of the House. The Congress and JD(S) accused the BJP of kidnapping Patil to diminish the ruling coalition's strength.

According to sources, 15 rebel MLAs from the Congress and JD(S) are camping at a luxury hotel in Mumbai even as the confidence motion was moved earlier this week.