Priyanka Gandhi under detention at UP, determined to meet victims' families 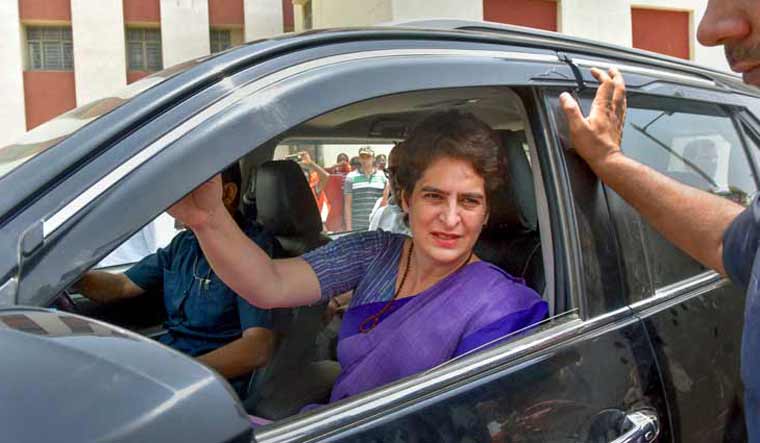 Detained by the police on her way to Sonbhadra to meet the families of ten Adivasi farmers who were killed because of a land dispute, AICC General Secretary Priyanka Gandhi Vadra upped the political stakes over the issue, declaring that she will not return from the area till she is allowed to meet families of the victims.

Priyanka, who is the AICC General Secretary in charge of Eastern Uttar Pradesh, arrived in Varanasi this morning, from where she headed towards Sonbhadra. She was, however, detained in Mirzapur. The local administration refused to allow her to proceed to the area where the farmer killings had taken place, stating that Section 144 was in place.

“Politics is a different issue. Gross injustice has been done to the Adivasis. They were killed mercilessly because they demanded their rights. The land which they were tilling for generations was seized by others,” she said, addressing Congress workers at Chunar Fort in Mirzapur, where she was taken after detention.

“Eleven people were killed. Three of them were women. I went to the hospital, where six injured are admitted. Amongst them is a 17-year-old...His mother lay on the bed next to him. She also has a bullet injury. She was hit by a brick on her head. Her arm was broken with a 'lathi'. So where is the law and order machinery of this state?” Priyanka said.

She questioned why the police or the administration did not heed the pleas of the Adivasis when they approached them with the apprehension that the land dispute could lead to violence.

Priyanka said she told the local administration that she was aware that Section 144 was in force in Sonbhadra, hence she would go there accompanied by only three persons. “I said I wanted to meet the victims' families because it is important for them to know that there is someone standing with them, that they are not alone,” she said.

“When I reached Mirzapur, I was stopped and was told that I could not go to Mirzapur. I asked why. I told them, show me the order. There is no Section 144 in Mirzapur. It is in force only in Sonbhadra. And I told them I will not violate it. I will go there peacefully with three persons. They said will not let you go, there is a phone call from above,” she said about her detention, claiming high-handedness by the state administration.

“I said I will go (to Sonbhadra) since there is no order, and you cannot show me under what Act you are not letting me go. Then they arrested me and brought me here,” she told the party workers.

“I want to meet the victims' families. And until I am able to meet them, I am not going away from here,” she said amidst a roaring applause from the Congress workers.

She also noted that the incident was nothing less than a massacre and complained that the media did not prominently report it. “I came here so that the whole country can see what is happening here,” she said.

Priyanka's arrival in the area today signalled the Congress' intent to take on the BJP government in the state over the Sonbhadra incident. And her detention has given the party an opportunity to accuse the Yogi Adityanath's dispensation of high-handedness.

Also, the development comes in the midst of a growing chorus for 'Priyanka as Congress President'. The party has taken up Priyanka's detention strongly, with Congress President Rahul Gandhi tweeting, “The illegal arrest of Priyanka in Sonbhadra, UP, is disturbing. The arbitrary application of power, to prevent her from meeting families of the 10 Adivasi farmers brutally gunned down for refusing to vacate their own land, reveals the BJP Government's increasing insecurity in UP.”

The Congress issued a statement in which it demanded that Priyanka should be released immediately and that permission should be given to her to visit the families of the victims in Sonbhadra. The party has also decided that dharnas and demonstrations will be held throughout the country to protest against Priyanka's arrest and the “atrocities done over common man by the BJP government”.