By inducting Thakore, the BJP is eyeing OBC votes 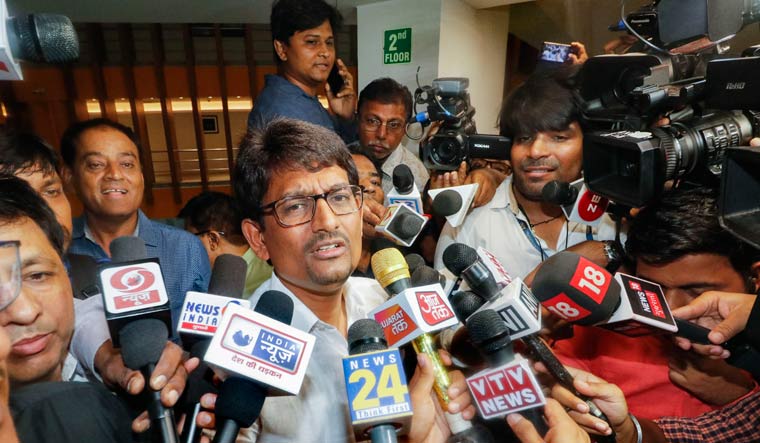 Alpesh Thakore, the prominent OBC leader from Gujarat who joined the BJP along with his close aide Dhavalsinh Jhala, said that he has finally come to a gurukul from a school with weak teachers.

Seated next to Gujarat BJP president Jitubhai Vaghani at the party's state headquarters in Gandhinagar, Thakore was referring to Congress, the party he quit before the Lok Sabha elections.

He said that months of speculations have come to an end and he has joined the leadership of Narendra Modi and Amit Shah, who people know will take Gujarat and the nation to greater heights.

Thakore alleged that the Congress was nothing other than a party for one's own personal interests. He emphasised that support of the powerful was necessary to work for his people (read community).

He appreciated the Vijay Rupani-led BJP government for making prohibition rule stringent within days of his sitting on hunger fast.

By inducting Thakore, the BJP is eyeing OBC votes, which are sizable in number, for the 2022 assembly elections. Earlier, the party fielded Jugal Thakore, also an OBC leader, in the bypolls to Rajya Sabha. Both Alpesh and Jhala had cross-voted in favour of BJP candidates and then resigned as MLAs. Thakore's joining the BJP is a loss to the Congress, which is already decimated in Gujarat.

The OBC leader said that there can't be anything above nationalism.

As regards speculations that he would get a ministerial berth, Thakore said that it was up to the parliamentary board to decide. “I will work for the party even if I do not get anything,” he said.