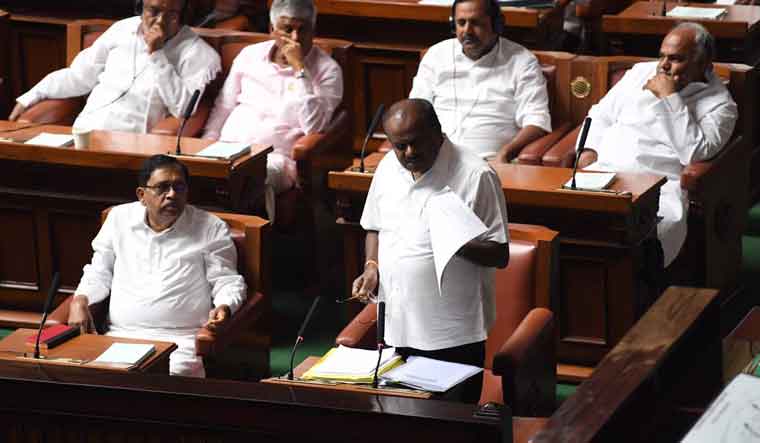 The political stalemate in Karnataka continues, even as Chief Minister H.D. Kumaraswamy tabled the confidence motion in the legislative assembly on Thursday.

The proceedings turned noisy several times, after the members of the ruling coalition and the opposition BJP locked horns over a point of order raised by Congress Legislature Party leader Siddaramaiah, stating the Supreme Court order exempting the rebel members from attending the House, had in turn curtailed the powers of the legislature party.

The House was adjourned for lunch after nearly three hours of discussion on the point of order raised by the CLP leader. After the proceedings resumed, the BJP accused the ruling combine of playing foul to delay the trust vote. "It is match-fixing by the coalition partners to save their minority government," alleged BJP leader C.T. Ravi, urging the speaker not to fall for this game of the ruling parties.

Earlier in the day, Siddaramaiah raised concerns over the Supreme Court's interim order "curtailing his right" to issue a whip. Siddaramaiah raised a point of order soon after Kumaraswamy began making his submission on the confidence motion. "The absence of the members will adversely impact the Congress party and the coalition. So this motion should be postponed," urged Siddaramaiah.

Speaker K.R. Ramesh Kumar, too, seconded the fact saying the structure of the House was incomplete to go ahead with the trust vote. "After we convened the session, the SC verdict has granted the members exemption from attending the House. How are we to reconcile these two issues," said Kumar.

When BJP MLA J. Madhuswamy objected to the House making references and remarks about the Supreme Court verdict, saying it was uncalled for, Congress MLA H.K. Patil reminded the BJP that disregard for the right of the party to issue a whip was a serious issue.

Congress minister Krishna Byregowda argued that a member who has taken oath under Section 188 was free to resign under Section 190. But currently, the status of the rebel MLAs is not clear. So, a trust vote has to be put off till the speaker, who has the powers to accept or reject the resignations, gives a ruling.

BJP member Basavaraj Bommai said there was no ambiguity as the members who resigned continued to remain members as long as the speaker accepted their resignation. He also reminded the House that the SC had taken cognizance of the confidence motion due on July 18, before giving the interim order.

The BJP leaders insisted that the Congress had the option of impending in the case as respondents and seek clarity on the whip. "It is a party affair and not a matter concerning the House. The intention is clear. They want to waste time and deviate from the day's agenda," said BJP leader Jagadish Shettar.