The Indian delegation has also sought consular presence in the gurudwara 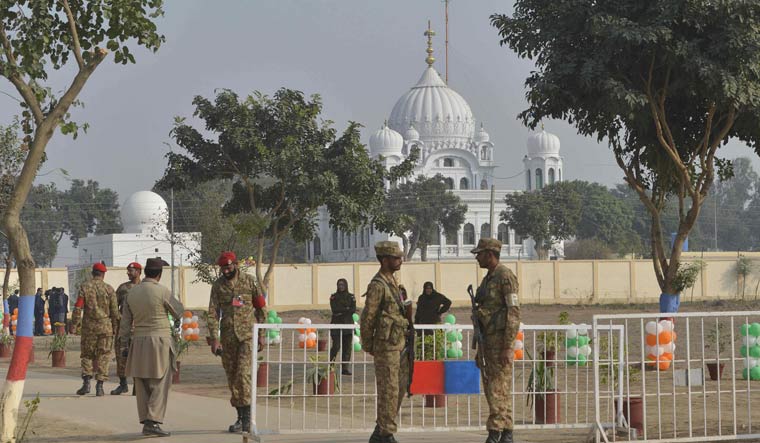 India on Sunday conveyed its concerns to Pakistan on possible flooding of areas adjoining the Kartarpur Sahib gurdwara due to the construction of a causeway by the neighbouring nation and urged it to make a bridge like India is doing.

At a bilateral meeting, New Delhi also urged Islamabad to take into consideration the sentiments of pilgrims to have smooth, easy, unrestricted access throughout the year for visiting the Kartarpur Sahib gurdwara, the final resting place of Guru Nanak Dev Ji, anofficial statement said.

A dossier was handed over to Pakistan to highlight India's concerns to which it assured the Indian delegation that no anti-India activity would be allowed.

In this context, concerns regarding individuals or organisations based in Pakistan who might try to disrupt the pilgrimage and misuse the opportunity to play with the pilgrims' sentiments were shared, the statement issued after the second round of discussions on the project said.

The Indian delegation has also sought consular presence in the gurudwara to be able to provide assistance to the pilgrims, if required.

The Indian side conveyed concerns regarding the possible flooding of the Dera Baba Nanak and adjoining areas on the Indian side as a result of earth-filled embankment road or a causeway that is proposed to be built by Pakistan on their side.

The Indian delegation shared detailed flood analysis with Pakistan to underscore these concerns.

It was clearly conveyed that an earth-filled embankment or a causeway will create problems for Indian people and should not be built even in the interim, the statement said.

Details of the bridge that India is building on its side were shared, and Pakistan side was urged to also build a bridge on their side.

This would not only address the flooding related concerns, but also ensure smooth, hassle-free, all-weather pilgrimage to the holy Gurudwara Kartarpur Sahib throughout the year.

The Pakistan side agreed, in principle, to build a bridge at the earliest, it said. Pending the construction of the bridge over the old Ravi creek by Pakistan on their territory, India offered to make interim arrangements for making the corridor operational in November, given the historic importance of the 550th Birth Anniversary of Guru Nanak Dev Ji.

The talks with Pakistan on the modalities for operationalisation of the Kartarpur Sahib Corridor was held at the Pakistan side in Wagah for which an Indian delegation crossed over to the other side of the international border.

The Indian delegation was led by Home Ministry Joint Secretary S.C.L. Das and comprised representatives from the ministry of external affairs, ministry of defence, the Punjab government and the National Highway Authorities of India.

The meeting discussed the modalities and draft agreement for facilitation of pilgrims on the Kartarpur Sahib corridor, as also the infrastructure being developed for it.

The meeting reviewed the progress reached in the three rounds of technical meeting that were held in March, April and May 2019.

They endorsed the crossing point "zero point" coordinates that were agreed to at the technical level.

It was agreed to allow visa-free travel for the Indian passport holders and OCI card holders seven days a week.

Throughout the year, 5,000 pilgrims will be allowed to visit Kartarpur Sahib gurudwara per day.

The pilgrims will be allowed to travel as individuals or in groups and also on foot, the statement said.

Pakistan highlighted the infrastructural constraints on their side and conveyed that they might be able to accommodate many of India's proposals in a phased manner.

Pakistan was asked to reconsider its position as the corridor is a long pending demand of the pilgrims and there is expectation that Pakistan would be liberal in allowing more pilgrims and facilities for them.

Both sides have agreed to maintain a channel of communication and work towards finalisation of the agreement on the Kartarpur Sahib corridor.

The technical teams would meet again to ensure that seamless connectivity for the corridor is operational in time so the pilgrimage can begin in November.

In this context, they reiterated the following requests—there should be no restrictions on the pilgrims in terms of their faith, provisions should be made for preparation and distribution of 'langar' and 'prasad' for the pilgrims. The importance for ensuring safe and secure environment for the pilgrims was also underscored.

Based on the representations that were received by the government, the issue of encroachment of land belonging to the gurudwara was once again raised and Pakistani authorities were asked to restore the land to honor religious sentiments.

The Pakistani side agreed to look at this issue.

Government of India has made significant progress in building a state-of-the-art infrastructure, including passenger terminal on the Indian side that can handle over 15,000 pilgrims in a day. This is targeted to be completed by October 31.

The work on the four-lane highway to the crossing point at the international boundary is progressing satisfactorily and is on schedule. It will be completed by September-end.

It has also been proposed to Pakistan to allow 10,000 Indian pilgrims to visit the country under the 1974 protocol on the auspicious occasion.

Progress was made in finalising the draft agreement with regard to the modalities.