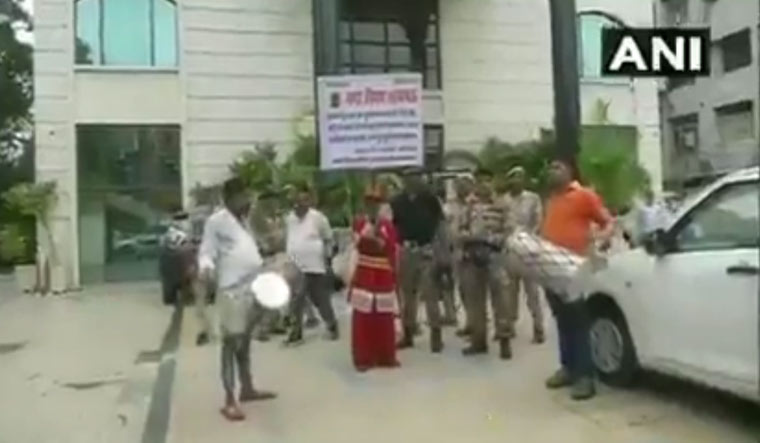 The Lucknow municipal corporation, which has been beating drums to shame tax defaulters into paying their dues, faced strong protest by business owners and angry residents on Thursday for being “too noisy”.

Since Monday, the Lucknow Nagar Nigam (LNN) has been beating drums outside the houses and business establishments of tax defaulters to shame them into paying their dues. Three days of this exercise had brought the body Rs 87 lakh worth of house tax—something which had been pending for over four years.

On Thursday afternoon, however, when a 10-member team of the LNN reached Gauri Bazaar in Sarojini Nagar area, angry business owners began shouting slogans, asking them to go back.

Virendra Pratap Singh, one of the tax surveyors who was part of the team, told THE WEEK, “We had gone to recover dues of about Rs 10 lakh pending for the last one-and-a-half years from a restaurant and a shopping complex. The defaulters and their supporters turned on us and chased us”. Four team members, including Singh, were left with bruises and torn clothes in the ensuing scuffle. The other six ran away before the crowd got angry.

Arun Singh, a provision store owner who witnessed the episode, said that the anger of the locals was justified. “We get no civic facilities. Just a little rainfall and our area is water-logged. What right has the Nagar Nigam got to create such a nuisance? If it does not perform its duties, why does it expect better from the citizens?”

After repeated notices and offers under the one-time settlement scheme did not work, the LNN staff came up with the idea of 'shame to pay' scheme to recover its dues of Rs 158 crores. Under it, professional dhol players—the kinds who play at weddings—were engaged to beat their instruments outside the buildings of defaulters. One person was deputed to stand with a large placard announcing the corporation’s warning to other tax offenders to pay up or face the same kind of music.

On Tuesday, fifteen minutes of this music had prompted one embarrassed hotel owner to cough up the tax worth Rs 31.12 lakh which he had not paid for the last one-and-a-half years.

Indramani Tripathi, the municipal commissioner, said despite Thursday’s hiccup, the exercise would continue. “We will play every day till the big defaulters pay up”.

Meanwhile, a complaint against unknown persons has been lodged at the local police station.