The cyclone will not make a landfall in Gujarat 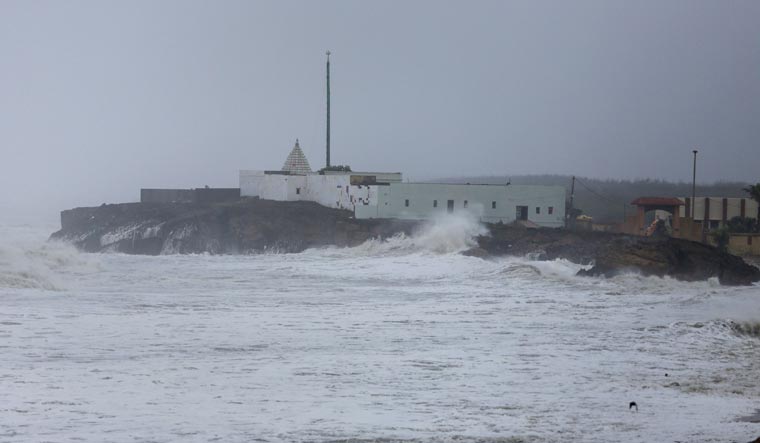 A huge wave hits the wall of a temple along the sea shore during high tide, at Veraval | PTI

Gujarat was bracing for the worst. However, with Cyclone Vayu starting to skirt Saurashtra coast on Thursday afternoon, the state can heave a sigh of relief to some extent.

The cyclone changed its course on Wednesday evening and now it is certain that it will not make a landfall in the coastal areas of Gujarat.

It has started moving north-westwards and is expected to pass over Saurashtra region, affecting Rajkot, Jamnagar, Porbandar, Amreli, Gir Somnath districts and Union territory of Diu. These areas will get heavy to very heavy rainfall.

Heavy rains are already being reported from various parts of Gujarat, especially Saurashtra region. The wind speed is above 70 kilometre per hour.

Gujarat has prepared to brace Cyclone Vayu by evacuating over 3.5 lakh people to safer places.

Additional Chief Secretary Pankaj Kumar said that though the cyclone has changed it course, it can still cause heavy to very heavy rainfall. The state government, he said, is on a standby mode.

The cyclone is likely to change its course near Porbandar. Very high tides are being witnessed there.

In the last 24 hours, four of the 29 pregnant women in Bhavnagar district, who were moved to safer places, gave birth with the assistance of medical teams.

They were visited by state minister Vibhavari Dave and in-charge secretary of Bhavnagar, Anju Sharma.