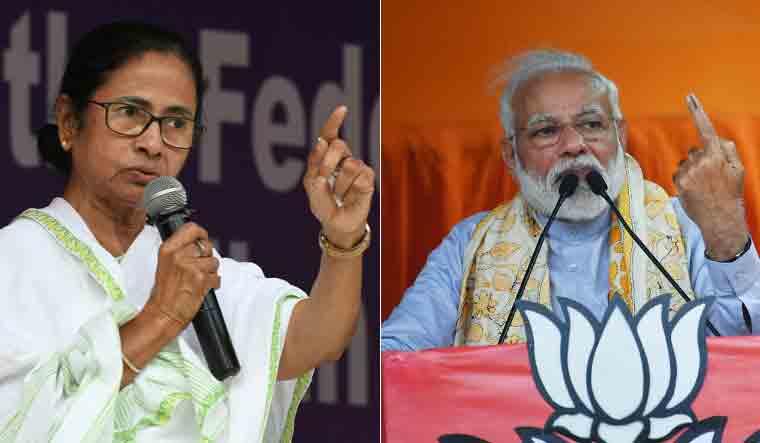 Emotions ran high on the last day of campaigning in Kolkata ahead of the final phase of voting on May 19. Chief Minister Mamata Banerjee on Thursday threatened to send Prime Minister Narendra Modi behind bars for "lying" about the violence that happened during Amit Shah's roadshow in Kolkata. “I heard that during a public meeting in Uttar Pradesh, he (Modi) lied that we broke Ishwar Chandra Vidyasagar’s bust. Let him prove his allegations. Or else we will drag them to jails. We have all the documents,” Mamata said lashing out at the prime minister. She added that he was a big liar and "should be made to do 100 sit-ups".

PM Modi retorted that Mamata had nothing to do with the rich Bengal culture. "Didi does not represent the true culture of Bengal. She has nothing to do with the rich culture of Bengal," PM Modi said addressing a mammoth rally at Mathurapur in South 24 Parganas. "Here Durga Puja, Saraswati Puja and even taking the name of Ram are seen as an offence," Modi said to a cheering crowd.

Modi added that he saw on television Mamata threatening to seize the BJP party office. "I know her mentality. She has the habit of grabbing property and land. Yes, she can do that," Modi said in a veiled reference to recent allegations that Mamata's kin has built huge properties in South Kolkata where she stays.

Reiterating his "sticker didi" remark, the prime minister also referred to her as "dishonest". "I have no problem in naming you 'sticker didi'. But at least, do your job honestly," Modi charged, saying rural road projects have not been undertaken in the villages of Bengal.

PM Modi also dared Mamata to show the CCTV footages from Vidyasagar college, which was at the heart of violence during Amit Shah's roadshow on Tuesday. She would not show the footages, he said. "Perhaps she has wiped out that (the evidence) as well like she did with Saradha scam," Modi said in a high-voltage attack against Mamata.

Modi promised that he would investigate the vandalism in the college and bring out the truth if elected back to power. "Because Vidyasagar is not the pride of only Bengal, but of India as well."

Meanwhile, Mamata held a 10-km padayatra covering the minority belt from South Kolkata to South 24 Parganas on Thursday. Several thousands joined the padayatra in support of her nephew Abhishek Banerjee, who is contesting from Diamond Harbour.

Earlier in the day, the SPG wrote to West Bengal DG inquiring about the security measures taken ahead of the PM's rally on Thursday. The West Bengal police had to submit a report to the SPG in Delhi, after which the rally was cleared.

An police officer said, "The SPG talked about threat to PM Modi in Bengal."

With Bengal turning into a flashpoint ahead of the last phase of polling, BJP president Amit Shah, in a first in the state, began contacting voters over mobile phones urging them to vote for the BJP.