Frenzy over one leader can be dangerous for democracy: Yashwant Sinha 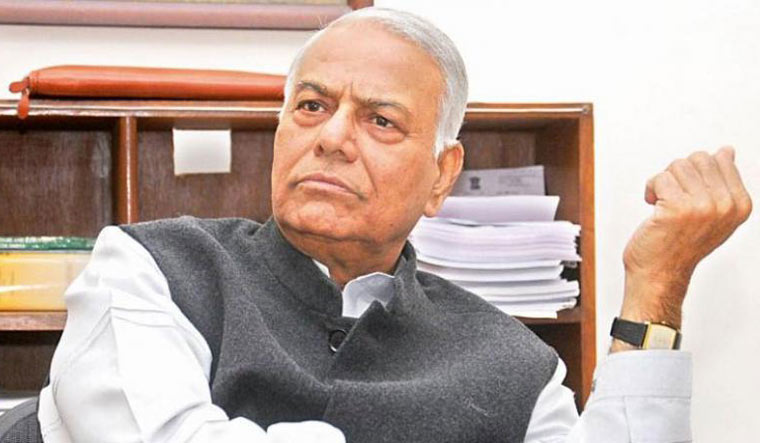 You have been unhappy in the BJP for a long time, but of late this anger seems more stringent. One of your recent tweets compared the crowd at Narendra Modi’s road show prior to his nomination in Varanasi with those that turned out for Hitler in Nazi Germany. Why this spurt in anger?

It is not a new feeling. Sometimes excess popularity of a leader can be very dangerous for democracy and that is the connection I wanted to establish. Old timers like me will remember the kind of frenzy Hitler created in Germany and the price that Germany had to pay for that. This kind of frenzy is not good for democracy. I don’t think any leader in India starting with Mahatma Gandhi to Vajpayee ever created this kind of frenzy. Frenzy and democracy do not go together. You say your piece; you tell the people what you want to say and leave it at that.

What is your opinion on the level of discourse in this election?

The PM has single-handedly lowered the discourse to a level never seen before. We have a captive Election Commission. People were talking about Modi ki sena but while the Indian Armed Forces will never be that, it certainly has become Modi's Election Commission. To give him a clean chit is unfair in the extreme. They have descended heavily on other leaders for minor infringements but here is a major infringement, a clear call to communal disharmony and the EC does not see it proper to proceed against the PM. The institutions of democracy are being steamrolled into submission. That does not augur well.

Your son (Jayant Sinha, minister of state for civil aviation who is the BJP candidate from Hazaribagh) hoped that you would vote for him.

I can’t talk about my vote. There are times of higher callings in one’s life. I have all my love and affection for my son but we are on opposite sides of the political spectrum.

What is your take on economic growth figures under this government which are not necessarily proven on the ground?

Every number which is coming out of this government is highly suspect. There are some proven examples. There was a committee appointed under Sudipto Mundle for tracing the economic growth rates over a period of years that included the UPA years. The report was not acceptable to the government and it was sent to the Niti Aayog which has nothing to do with statistics. There is an independent statistical commission which was set up as the result of the recommendations made by a committee in my time. When the Niti Ayog dressed up those figures then the chairman and the other members of the National Statistical Commission resigned. This did not make such a splash in this country as it should have. They have clearly manipulated the growth figures. The NSSO had made an analysis of the number of job opportunities created by the famous Mudra Yojana about which the government was making tall claims. Those figures too were suppressed because they did not suit the government.

What about the data on job creation?

The EPFO data which is actually data about the formalisation of jobs is being trotted by this government as data for job creation. They are talking about crores of jobs in the MSME sector. Where are they coming from? The economy is not growing. Industrial growth has fallen to 0.1 per cent in February, there is agrarian distress for the last five years, services sector is not growing as well as it should, manufacturing is in the doldrums. So, where are the jobs coming from? The government is saying on the basis of cooked up figures that the economy is growing at the rate of 7 per cent. The fact is that the less than 5 per cent and that is why there are no jobs. Such figures are created by agencies of government which have no jurisdiction to put out those figures or which at the instruction of the government are indulging in plain falsehood. Niti Ayog is the biggest culprit.

Do you think the media is complicit in this?

Completely. It is most unfortunate that the media is not questioning anything about this government, not just these figures. The media has been crushed into submission. There are only a few honourable exceptions such as your magazine.

You have been vocal about the BJP not treating its elders well. Do you think there is time to course correct?

No, it is too late now. In 2002, Vajpayee had gone determined to the party’s national executive meeting in Goa to get the resignation of Modi then chief minister of Gujarat, after the infamous riots in the state. He was prepared to sack Modi in case he did not resign. Mr Advani said that he would resign if Modi was sacked. Look at the manner in which Modi has treated him. There could not have been a bigger benefactor to Modi than Mr Advani.

Do you think there is a credible opposition?

It is largely credible. It will have definite impacts on the figure. There is no grand alliance. There are alliances at the state level so no point in talking about national figures. As far as BJP is concerned, from all calculations, it appears that there will be not more than 200 seats for it. This includes the NDA.

Can the BJP do anything to get you back?

Not at all. I have no wish to return to BJP or any political party. I have finished that phase of my life.

Will you be campaigning in this election?

No, I have not really been campaigning in UP or elsewhere. I am only going to places where I have a sense of duty to do so or where I have an invitation to do so. For example, the TMC president invited me to visit Asansol for a day and a half. Here, I have come with a sense of duty as I have a long family relationship with Poonam Sinha (the BSP-SP alliance candidate from Lucknow). I will also go to Patna with that sense of duty (from where Shatrughan Sinha is the Congress candidate). Besides that I am going to Kolkata again because Trinamool has invited me. I will go to Bhopal as Digvijaya Singh has invited me. So, cutting across political lines wherever opposition party leaders or candidates are inviting me, I am going to those places.