Lok Sabha polls: Farooq Abdullah up against greenhorns in Srinagar

Abdullah had won the LS byelection from Srinagar in 2017, after losing in 2014 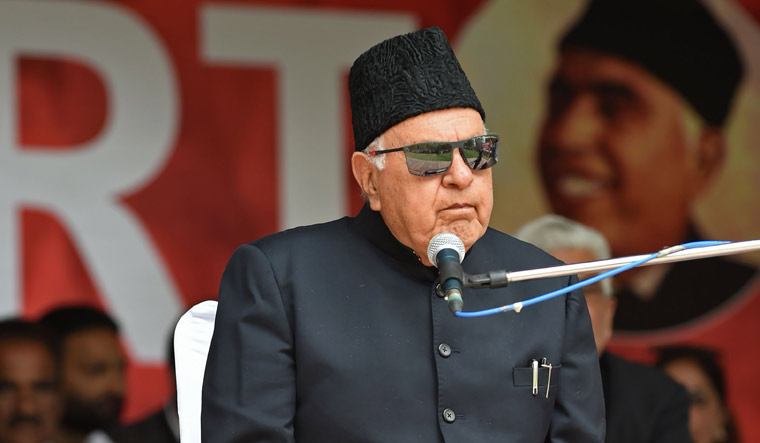 As Srinagar Lok Sabha constituency votes on Thursday, it's a fight between veteran politician and president of the National Conference Farooq Abdullah and greenhorns from the PDP, Peoples Conference (PC) and BJP.

Abdullah won the Lok Sabha byelection in Srinagar in 2017 even as only seven per cent turnout was recorded.

The PDP has fielded Aga Syed Mohsin, a Shia Muslim. He made his debut in politics a decade ago, but has not been able to make a mark on the political landscape of Kashmir.

The PC has given its ticket to Irfan Raza Ansari, also a Shia Muslim, and BJP has fielded Khalid Jehangir. The BJP doesn't have a support base in Kashmir, but it hopes to attract some Shia voters and Kashmiri Pandits, most of whom live outside Kashmir.

The presence of two Shia candidates is likely to benefit Abdullah as the votes from the community would be split. Abdullah (83), has addressed several rallies in Srinagar and Budgam districts that constitute the Srinagar Lok Sabha constituency.

His campaign has largely focussed on defending Article 370 of the Constitution that grants Jammu and Kashmir a special status in the Indian Union, and Article 35A of the Constitution, which protects J&K State Subjects Law that bars outsiders from settling in the state.

The BJP has promised in its manifesto to abolish both articles to end separatism in Kashmir.

The NC has also targeted the PDP and PC, alleging the parties paved the way for the BJP in the state.

Abdullah has lost only once in his four-decade-long political career. He was defeated by PDP's Tariq Hamid Karra in the 2014 Lok Sabha polls in Srinagar.

Karra quit the PDP over killings of civilians and blinding of scores of protesters by pellets in the 2016 uprising triggered by the killing of a Hizbul Mujahideen commander and two of his associates in an encounter at Kokernag in Anantnag. Karra joined the Congress after quitting the PDP.

The Congress has not fielded a candidate in Srinagar to support Abdullah. The NC has returned the favour by not fielding candidates on two Lok Sabha seats in Jammu—Jammu and Udhampur.

It would be interesting to see how many people show up at polling booths in Srinagar as the constituency, especially Srinagar district, is considered a stronghold of the separatists.

In the last Lok Sabha polls, scores of booths recorded zero per cent turnout in the constituency.