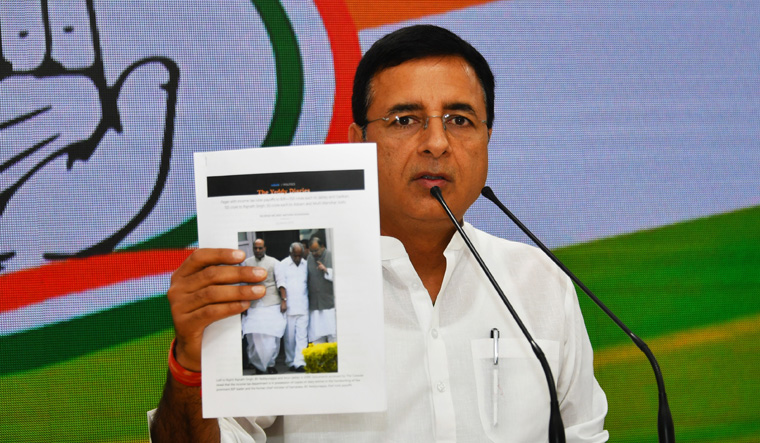 Referring to a story by The Caravan magazine, the Congress leader said that former Karnataka Chief Minister and BJP leader B.S. Yeddyurappa bribed top leadership of the government in 2009.

According to The Caravan report, the Income tax department is in possession of copies of diary entries by Yeddyurappa which notes that he paid Rs 1,800 crores to the BJP's national leaders. The reports states that Yeddyurappa made these records in his own handwriting in a Karnataka state assembly legislator's 2009 diary in Kannada. According to Surjewala each page of the diary was signed by Yeddyurappa and names leaders from Prime Minister Narendra Modi to smaller leaders of the BJP.

Congress claims that they had brought up this accusation earlier too in 2017 by ways of a video recording in which Yeddyurappa and BJP leader Ananath Kumar were heard talking about the paid amount. Surjewala read out the transcript of the video which they the party had released in February 14, 2017. Surjewala said that there was no rebuttal on the video from neither Yeddyurappa nor Ananth Kumar.

Surjewala quoting The Caravan report said that the Rs 1,800 crore was used to pay off BJP’s national leaders, its central committee, and judges and advocates. According to Surjewala copies of the diary pages are with the Income tax department since 2017.