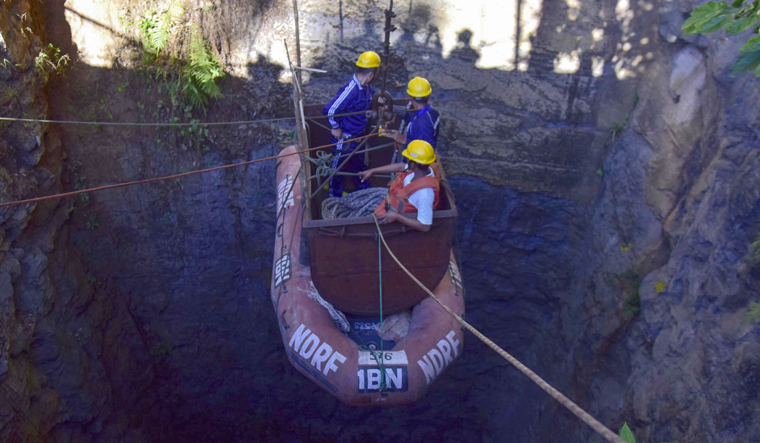 The Supreme Court on Tuesday reinforced a ban on mining in East Jaintia hills of Meghalaya, amid government's failure to rescue 15 miners from a rat hole mine for the past one month.

In an order which accepted the arguments of the National Green Tribunal (NGT), which had said, in 2014, that rivers, farms and forest lands were greatly damaged due to massive mining in the hilly area, SC accepted all arguments of the NGT as valid. It has asked the state government to monitor the state so that the mines are not used illegally. The apex court has also asked the Meghalaya government to do the needful to enforce a mining ban in the area.

Speaking exclusively to THE WEEK last month, Chief Minister Conrad Sangma said mining in the Jaintia hills was allowed, with suitable measures to protect the environment and ecological balance.

Sangma said, "We will have to do a bit of balancing between giving permission to mines, along with protecting the nature." The BJP, which is part of the coalition, had asked the government to take all necessary steps to submit a petition to the Supreme Court legalising mining in the area.

There are around 24,000 rate hole mines around Jaintia hills in Meghalaya, which are all owned by private bodies. The coal rich belt has huge forests, and is surrounded by several rivers which flows down to the valley of Assam. As coal waste flowed down, all the rivers were polluted over the years.

Despite the ban, in the absence of any other livelihood, villagers continued to mine the hilly areas illegally. Last month, 15 of them were trapped inside one of thousands of rat holes. The matter was reported to government hours later as the villagers were subject to government action. Disaster relief officials were able to reach around 370 feet but rescue was not possible.

With no trace of the villagers, the chief minister sought help from the central government after three days. Prime Minister Narendra Modi pressed the defence ministry into action, and Navy and Air force were made available.

Several water pumps from a private organisation were rushed to Meghalaya from Odisha, with additional NDRF men, but that too failed. After Supreme Court's intervention, about 15 days later, Indian army contingent was sent to the accident spot on January 4.

Senior government officials of Meghalaya said senior scientists have been sent to Meghalaya from Hyderbad as well. "They are using remote controlled equipments to pump out the water inside the mine," a senior NDRF official said in a statement.

The real hindrance is rising water level inside the mine. "Even if we pump out water, the water inside the hole does not subside. There is also a problem in placing more equipment as the mines are not scientifically dug up," said the NDRF official.

Officials have accepted that there is no chance of the trapped villagers being alive.