Beyond the political rhetoric, what is fuelling the Modi wave? 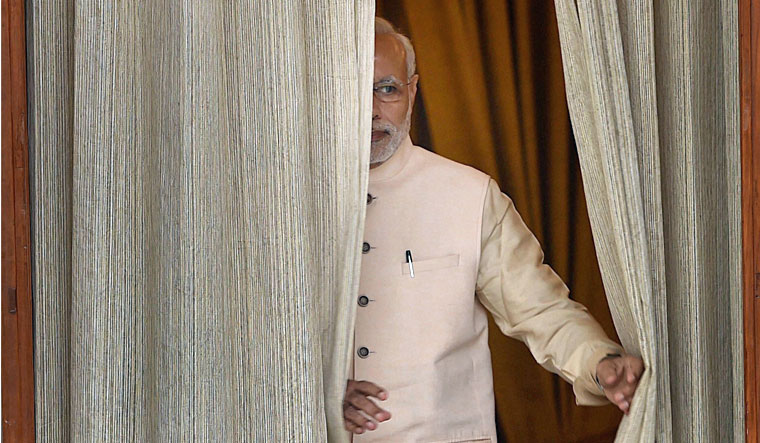 As the New Year dawns, the million dollar question that puzzles political India is whether Prime Minister Narendra Modi will return to power in the May 2019 parliamentary elections. The media had dubbed the recently held state elections as the ‘semi-finals’ and the results on December 11, especially the loss in the central Indian mineral-rich and Maoist-affected tribal state of Chhattisgarh, was seen as nothing short of an upset for the ruling Bharatiya Janata Party (BJP). The setback in the Hindi-speaking states has to be read against its contribution of 62 seats to Modi’s parliamentary strength. It stands second only to the 71 seats he grabbed from India’s most populous state, Uttar Pradesh.

The probable alliance between the two regional parties in Uttar Pradesh mathematically can make a huge dent in the 71 seats that propelled Modi to power in 2014. It is politically and theoretically impossible to hedge the anticipated loss in this set of 133 seats, i.e., nearly 50 per cent of the 282 that BJP has in the present Parliament. It is this perspective that is fuelling the demand for a unity among the opposition parties across India, and is probably worrying Modi personally and making his supporters nervous.

In the middle of his tenure, after the state election results of Uttar Pradesh, some of the opposition leaders had said that they should prepare for 2024 and not 2019 parliamentary elections. It was the height of Modi’s political dominance in the electoral landscape. Later on, with the close coordination of the two regional parties in Uttar Pradesh, the much-exhausted opposition saw a ray of hope. And this expectation seems to be solidified with the December 11 results.

The answer to our question lies in knowing how Modi came to power in 2014. In a recent commentary on Indian electoral politics, University of California, Berkeley, political scientists Pradeep Chhibber and Rahul Verma argue that it was a combination of the traditional base and new voters, who wanted a limited state, along with an unprecedented coalition of social groups that helped Modi in 2014. The multiple scams that rocked the tenure of the then Prime Minister Manmohan Singh were pitted against the efficient market-friendly chief ministership of Narendra Modi. The administrative laxity and political indecisiveness of Singh were weighed against the firmness and transparency of Modi. These optics galvanized the economically right-leaning voters, and created hope for the toiling masses cutting across social divides. In fact, this was the ‘Modi effect’ of 2014.

So the big question is, have the voters benefitted under the rule of Modi? Did they improve their life chances? One of the first programme launched by him was the Clean India Campaign in October 2014. This programme passed on the onus of public hygiene and cleanliness from the state to the citizen. It was aimed at inculcating a sense of responsibility and civic duty. In March 2015, he launched another programme, to motivate households that can let go of cooking gas subsidy and buy it at market price. Within a year, 8.22 million people (claims the government) joined this campaign popularly labeled as the ‘Give it Up’ campaign of the Modi government. People’s willingness to sacrifice certain personal benefits for the betterment of the larger public interest was unequivocally demonstrated during their course of these two policies. Moreover, it can be clearly seen that the sense of a larger good is overriding the concern of better life chances among the voters. By making the voters participate actively and individually in his vision of ‘New India’, Modi has successfully incorporated the voters and citizens in taking collective responsibility for the general welfare of the country.

In an unexpected move on November 8, 2016, the high stakes-policy of withdrawing high denomination currency notes from public circulation was announced by Modi. Prolonged cash shortages were the order of the day among other problems triggered by demonetisation. The debate on its success and failure is still not settled as the economic repercussions of the policy are still unabated. Nevertheless, the pertinent point is that Venezuela had attempted the same on December 11, 2016 and, unlike the non-bloody reactions of the Indians, violence erupted in the Latin American left-leaning society that had led to the eventual withdrawal of the demonetisation process. The patience of the Indian voters to endure unprecedented hardships indicates not only the levels of societal tolerance but also their trust in their leader, Narendra Modi.

The ‘surgical strike’ of September 2016 on terror launch pads in Pakistan had preceded the economic shock of demonetisation. The military action catapulted him to the image of a strong leader who was not afraid of the possible international backlash in defending India. This move was part of many actions of the Modi government in asserting the role of India as a major geopolitical player. The Yemen crisis of 2015 and the 2018 cross-border operations in Myanmar reinforced his image of a strong and decisive leader.

It can be seen that, for his voters, Modi is still a strong leader and as one, he has been able to divide the burden of progress between himself and the citizens, so much so that he calls himself as the pradhan sevak (primary worker) of the country. So far the citizens have cooperated with him. He has also made the voters re-imagine their futures. The Smart Cities Mission launched in 2015 along with the renovation of the Soviet-inspired Planning Commission into an agency for vision building and transformation as NITI Aayog are all part of the larger development template that he stands for. This undoubtedly is what the economically right voters want and this is what they did not get under the previous regimes. The rationalization of the economy through Modi’s 2017 economic policy of the Goods and Services Tax regime can be perceived a continuation of a limited state and ordered markets. By providing rural toilets and cooking gas for rural women, he has effectively addressed the needs and aspirations of the non-urban population.

Under Modi, the most significant transformation was neither that of the economy nor society, rather, he transformed the voters from beneficiaries to participants. They are no longer passive spectators to socio-economic transformations. By incorporating the voters into the governance of the country, they are active stakeholders in the transformation story. This sense of empowerment and capability experienced by the voters is the biggest asset for Modi.

There are twin challenges for the opposition parties in India. First of all, it will have to translate the unity of opposition parties into the unity of opposition voters. It is easier said than done. The vote base of every political party is based on the ‘othering’ of the ideology and policies of the competing political parties both at the regional and national level. So will a voter, who has been subjected to political propaganda of a particular kind, sidestep the differences she or he has been made to experience for the sake of a short-term political gain? Secondly, when the voters weigh their role in future India, will they want to be an empowered participant or a passive spectator? The probability of resolving these twin challenges is herculean given the time left for the upcoming parliamentary elections. Under these political circumstances, the answer to our question is, Narendra Modi is most likely to hold on to power in the general elections in May, 2019.

—Rakesh M. Krishnan is a historical sociologist based in Hyderabad