'Bulandshahr violence an attempt to instil fear among Muslims' 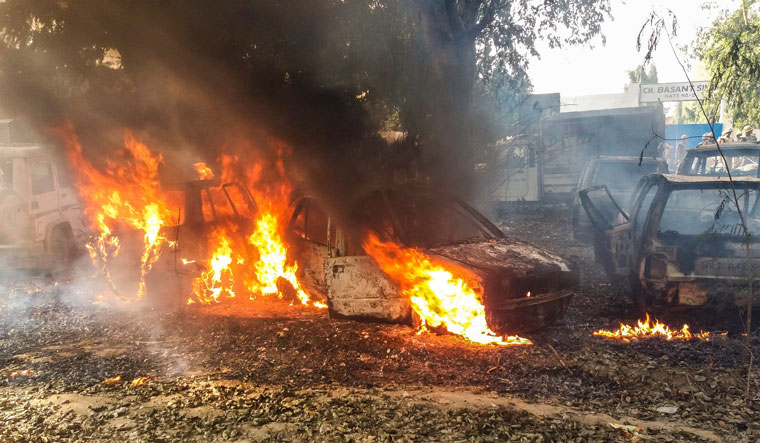 Cars that were set ablaze during the Bulandshahr violence | PTI

The recent Bulandshahr violence that claimed the lives of a policeman and a 20-year-old man was a "targeted attempt" to "instil fear" in the Muslim community, an umbrella organisation of human rights bodies claimed Sunday and demanded a Supreme Court-monitored probe into it.

Inspector Subodh Kumar Singh and civilian Sumit Kumar of Chingrawathi village were killed on December 3 in the mob violence that broke out in Bulandshahr's Siyana area after cattle carcasses were found strewn outside a village.

"Hindutvawadi forces masterminded" the incident to "polarise" the voters because of the "ongoing elections in five states", the organisation claimed, whose members visited Bulandshahr and presented a "fact-finding" committee's report here, and demanded a new law to check hate crimes.

The National Confederation of Human Rights Organisation (NCHRO) sought an immediate ban on all groups and 'senas' which use weapons "in the name of cow protection".

Addressing the media at the Press Club here, members of the NCHRO claimed that the violence was a "planted incident" to create unrest in the area and elsewhere "in the name of cow".

"The mob, at the instigation of local Bajrang Dal and BJP Yuva Morcha leaders Yogesh Raj and Shikhar Agrawal, gathered at the Chingrawathi police post and burnt down many vehicles, staged a shootout and pelted stones on the police force," it said in a statement.

The "fact-finding" team member Manoj Singh, of the All India People's Forum, claimed the way a purported video of the inspector's killing was shot "clearly indicates" the mob received political protection.

"In a peaceful area like Bulandshahr, the December 3 incident was a targeted attempt by Sangh-BJP organisations to instill fear in the Muslim community," said Singh.

He claimed that small skirmishes between local groups were used as an excuse to start communal clashes.

"There are clear signs of political conspiracies at play to discourage honest members of the administration, like Inspector Subodh, through intimidation and fear of life," he said.

He said there were also no signs of cow slaughtering at the fields outside Mahaw village, where the carcasses were found on December 3 morning, "which makes it clear that the mob violence...was executed through meticulous planning".

The NCHRO also highlighted that several innocent people, including two minors, were put behind bars while the key suspect, Bajrang Dal local leader Yogesh Raj, was still at large.

"A law should be made to contain mob violence and an immediate ban on all organisations and 'senas' which use weapons and have led the country to a civil war-like situation in the name of cow protection," the NCHRO said.