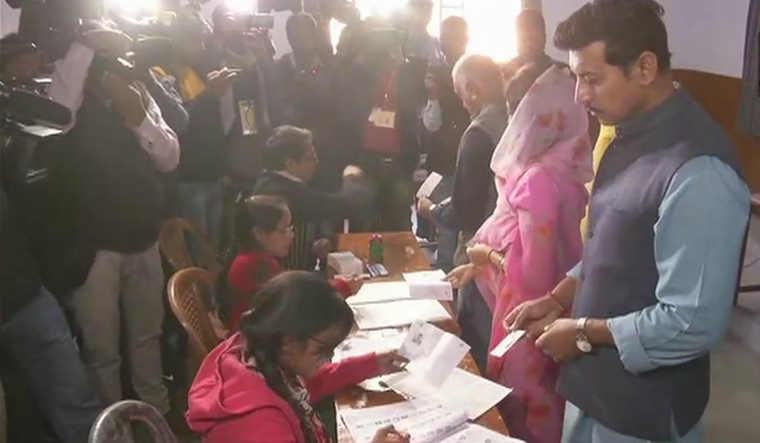 Polling for assembly elections in Telangana and Rajasthan began on Friday morning.

The outcome of the elections in Rajasthan, Telangana, Madhya Pradesh, Chhattisgarh and Mizoram is expected to set the tone for the Lok Sabha contest next year.

As many as 1,821 candidates, including a transgender, are in the fray in Telangana where 2.80 crore people are eligible to exercise their franchise. More than 1.50 lakh polling officials are on duty, manning 32,815 polling stations and conducting other arrangements.

The Congress has stitched together the Prajakutami (People's Front), along with the Telugu Desam Party (TDP), the Telangana Jana Samiti (TJS) and the Communist Party of India (CPI), to take on the ruling TRS, which is led by caretaker Chief Minister K. Chandrasekhar Rao.

The TRS, seeking a second term in office, is going alone, as also the BJP.

Telangana Chief Electoral Officer (CEO) Rajat Kumar on Thursday said as many as 446 flying squads were in operation in the state to swing into action if any irregularity was reported and 448 static surveillance teams would also keep a watch on the situation. They would wait in the wings to take action, he said.

Besides, 224 video-surveillance teams and 133 video-viewing teams have been pressed into service.

The election in Ramgarh constituency of Alwar district was put off following the death of Bahujan Samaj Party candidate Laxman Singh.

Raje, who is the BJP's chief ministerial candidate, is fighting against veteran BJP leader Jaswant Singh's son Manvendra Singh in Jhalrapatan, the constituency she has represented since 2003.

Manvendra Singh switched to the Congress just before the election, making the fight tougher for Raje this time. Raje had won 63 per cent of the votes cast in 2013, winning the seat by a margin of 60,896.

Tonk, with a sizeable Muslim population, is a keenly-watched contest between Sachin Pilot and BJP candidate and Rajasthan Transport Minister Yoonus Khan, who is the saffron party's only Muslim face in the elections.

This is a maiden assembly election for Pilot, a two-time MP who is seen as a chief ministerial possibility if the Congress wins. Pilot has represented Dausa and Ajmer Lok Sabha constituencies in the past.

Former chief minister Ashok Gehlot, who is also seen as a chief ministerial candidate for the Congress, is contesting from Sardarpura, the constituency he now represents. Gehlot has been the Rajasthan chief minister twice.

Jat leader Hanuman Beniwal is a concern for both the parties. He founded the Rashtriya Loktantrik Party and has fielded 58 candidates.