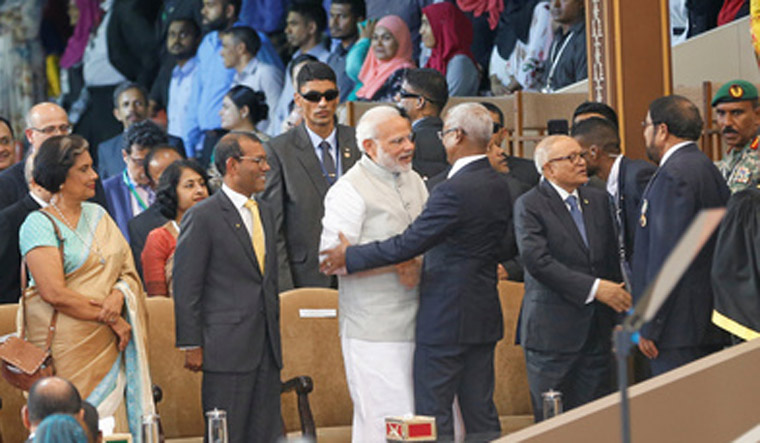 Prime Minister Narendra Modi, who made his first visit to Maldives on November 17, was the only head of state to be invited for the swearing-in ceremony of the island nation's new president, Ibrahim Mohamed Solih, say sources. In fact, India was the only country to be mentioned in the new president's inaugural speech. The two met immediately after the swearing-in ceremony, in what can be seen as a very special gesture.

The election was crucial to both India and the Maldives owing to Solih 's predecessor Abdulla Yameen's total disdain for democratic processes. Yameen's open pro-China stance was also a matter of concern to India.

Maldives was the only country in the South Asian Association for Regional Cooperation (SAARC) that frequent flier Modi had not visited as the prime minister.

Modi made a quick visit to the country for the ceremony. He will soon be embarking on his tour of Vietnam and Australia, both of which are also important, given India's thrust in the Indo Pacific as well as its Act East focus.

In a joint statement after the ceremony, the two leaders “noted the resilience of the relations between India and the Maldives and expressed confidence in the renewal of the close bonds of cooperation and friendship with the election of Mr Solih as the President of the Maldives.''

Both leaders agreed on the importance of maintaining peace and security in the Indian Ocean and “being mindful of each others' concerns and aspirations for the stability of the region.'' The writing between the lines is quite legible.

Solih spoke to Modi about the economic mess in his country and the two discussed ways in which India can continue its development partnership to help the new government in fulfilling its promises. Solih has flagged the need for building housing infrastructure and establishing water and sewerage systems in the outlying islands.

The two countries have also agreed to ease visa procedures. Indian nationals have had problems with work visas under Yameen's rule.

Maldives will be sending its foreign minister to India on November 26 to make arrangements for the first official visit of Solih to India. Traditionally, India's neighbouring countries (except Pakistan) make New Delhi the first overseas tour destination for the new head of state/government.