MP polls: CM Shivraj Singh to have a tough fight in his home turf 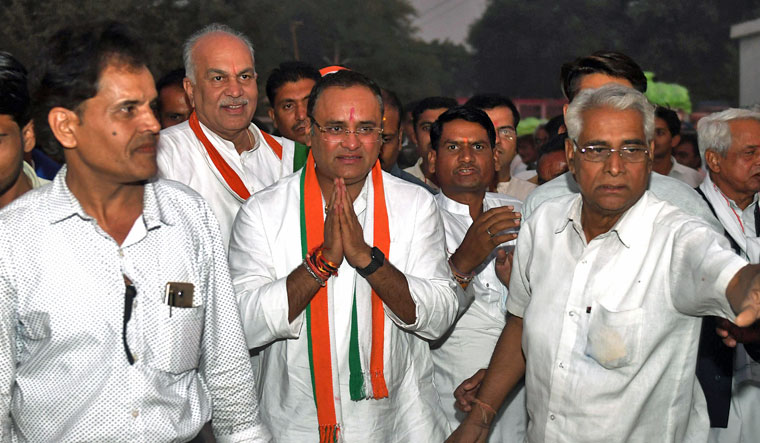 During the last two elections in 2008 and 2013, the opposition Congress could not find a powerful candidate who could take on Shivraj Singh, who has represented the constituency five times. This time around, the situation has changed as the chief minister is expected to face a tough against Yadav.

Yadav, 46, was a minister of state for heavy industries and sports in the Manmohan Singh-led UPA government and a two-time member of Parliament from Khargone.

According to a source in the Congress party, “This time the Congress president Rahul Gandhi himself ensured that all the powerful BJP leaders in the state do not go unchallenged. It was at his behest Arun Yadav was asked to file nomination against Chief Minister Chouhan, who got a walk over during the 2008 and 2013 assembly polls due to weak candidates.’’ Rahul Gandhi is likely to visit the area and address a public meeting campaigning for his candidate.

Shivraj Singh had won the last assembly polls in 2013 by a margin of over 84,000 votes. With Arun Yadav contesting, the constituency with a sizeable number of Yadav and tribal votes is likely to make things difficult for the chief minister, who has declared that he will not campaign in his home constituency as “people will support him”.

However, the chief minister's wife Sadhna Singh and son Kartikeya Chouhan are campaigning on behalf of Shivraj Singh. Arun Yadav, too, started his campaign the very day his name was announced. While the Congress leader is buoyed by the support, the chief minister's wife Sadhna Singh was shouted away in Rehti village during her election campaign. Women of Rehti have been complaining about the drinking water problem for the last one decade.

Arun Yadav started his campaign from the banks of the river Narmada after a short religious ceremony. He attacked the family members of Chief Minister Chouhan for allegedly running and giving protection to the sand mining mafia. The Congress party has often alleged that many BJP leaders and people related to the chief minister are part of the sand mafia which has ruined river Narmada and killed a number of people.

Shivraj Singh Chouhan mocked the candidature of Yadav by expressing sympathy for him saying that “the Congress has always exploited backward caste people, first they removed Arun Yadav from the PCC president post, now they have sent him as a scapegoat”.

Yadav retaliated by saying “the chief minister should not resort to these techniques of belittling political enemy and must remember that Madhya Pradesh has a record of two chief ministers losing assembly polls”.

In November 2003, Shivraj Singh, then a member of Parliament, was fielded against the then Congress chief minister Digvijaya Singh. Though Shivraj lost the polls, two years later he was made the chief minister of Madhya Pradesh by the BJP.