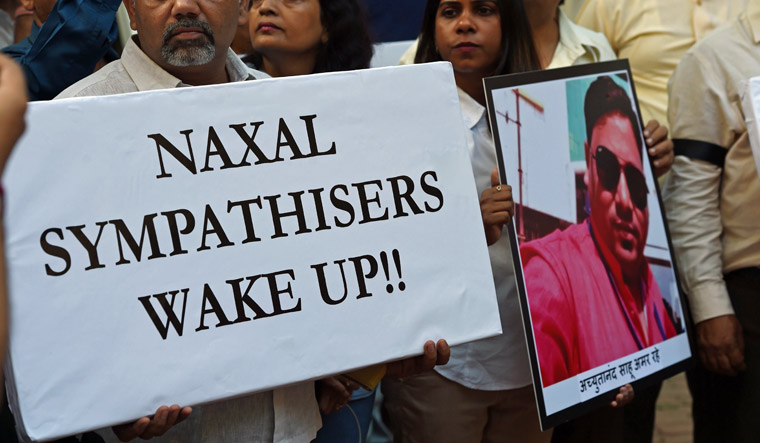 Journalists wearing black arm-bands hold a placard and a photograph of journalist Achyuta Nanda Sahu, who was killed by in a Maoist ambush while working | AFP

The outlawed CPI (Maoist) Friday claimed responsibility for the October 30 attack in Chhattisgarh's Dantewada district in which a Doordarshan camera-person and three policemen were killed, but said it did not intend to target the media.

In a statement, purportedly issued by the group and circulated on social media, the Maoists also asked media persons not to be escorted by police while visiting the conflict zone.

Police said the authenticity of the statement is being verified.

"On October 30, the Doordarshan team was caught in the ambush near Nilawaya village. It is sad that camera-person Achyutanand Sahu was killed in the attack. We had no intention to target media personnel," the CPI(Maoist) said.

The two-page statement was issued in the name of Sainath, secretary of the Darbha division committee of Maoists, which has allegedly been instrumental in executing several deadly attacks in south Bastar, including the Jhiram valley massacre in Bastar district on May 25, 2013 in which top Congress leaders were killed.

The Maoists alleged in the statement that police was forcibly carrying out road construction work between Aranpur and Burgum (Dantewada), although it was opposed by local villagers.

The ultras have also called for a boycott of the upcoming Assembly polls in Chhattisgarh.

"If Naxals did not want to attack media persons, why did they open fire on Sahu who was holding a camera. Later, they even looted his camera. Besides, two other members of the media crew were attacked," Awasthi said.

The policemen, he added, want development of the area and the road was being constructed for the convenience of local villagers.

Sub Inspector Rudra Pratap Singh, assistant constable Manglu and the cameraperson of Doordarshan Achyutanand Sahu were killed on the spot.

Two policemen were injured. One of them, Assistant Constable Rakesh Kaushal, died at a private hospital here on Wednesday morning.

The statement comes at a time when the attack on media persons by Naxals is being condemned across the country.

Assembly polls in Chhattisgarh will be held in two phases on November 12 and 20. Eighteen constituencies spread across eight Naxal-hit districts will go the polls in the first phase, and the remaining 72 seats in the second phase.

The votes will be counted on December 11.