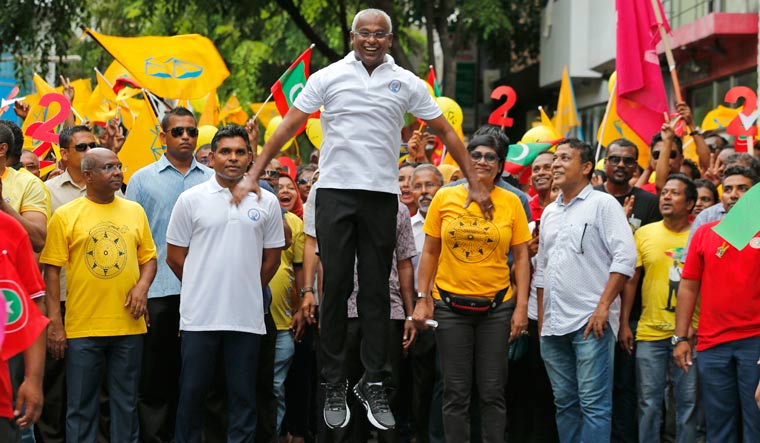 Even in the rain, it was the brightest Monday Maldives had seen for a long while. Over 89 per cent of people braved the weather and stood for hours to vote for change in an election that was largely believed to be fixed. President Abdulla Yameen of the Progressive Party of Maldives—who had brutally stamped out all dissent—was ousted in fairytale fashion to make way for true democracy.

Yameen had imposed two emergencies on the country and had jailed leaders, including former presidents Maumoon Abdul Gayoom—Yameen's half-brother—and Muhammed Nasheed. He was defeated by Ibrahim Mohamed Solih, popularly called Ibu. “The will of the people has spoken,’’ he said after the election results were declared. “It is decisively for change.’’ Solih got 1,34,616 votes while Yameen could muster only 96,132 votes. Solih's jump on hearing the election results—caught on camera and which went viral—summed up the mood accurately.

His win has offered India a ray of hope in a week dominated by foreign affairs disasters. The relationship between the two countries had been at a low ebb for quite some time. Yameen had courted China openly. India was in the embarrassing position of having to take back a helicopter it had gifted Male. What started as a cold war ended up as a serious diplomatic snub for India.

However, it is a little too early to celebrate. Till November, when Yameen officially steps down, the situation will be uncertain. If history serves as a guide, there has only been one smooth transition in power in Maldives. And Yameen is not likely to go away quietly into the night. There are serious concerns about his commitment to democracy and the verdict. The Progressive Party of Maldives, headed by Yameen, has called an extraordinary congress over the weekend. (The last time such a meeting was convened was in 2013).

“The immediate challenge will be the peaceful solid transition,’’ says Hamid Abdul Ghafoor, international spokesperson for the Maldivian Democratic Party, to which Solih belongs. “Everyone assumes these things will happen. But it has only happened once in 2008.”

There will be other questions, too, much before the experiment of democracy—being attempted in Maldives with different parties—even begins. Gayoom is still in jail. His appeal against the sentence has been filed. His terrorism charge is yet to be challenged. What will be the fate of Yameen himself?

Nasheed, who spearheaded an international movement to draw attention to the deteriorating situation in Maldives, wants to come home to attend the swearing-in of his friend Ibu. Can he? What happens to the charges against him?

While there are encouraging signs—the national broadcaster on Tuesday had started beaming the national council meeting of the MDP—the danger has not passed yet.

One thing is for certain—if things do pan out democratically, winning the election will have been the easy part. Solih is the joint presidential candidate for the opposition alliance, which includes the MDP, the Jumhoree Party and the Adhaalath Party. The challenge for Solih will begin now. And it will be simply what he promised. “Governance,’’ said Harsh Pant, distinguished fellow at the Observer Research Foundation, New Delhi, and professor at King’s College, London. “It is always easy to fight an enemy that you know, together. Going forward, how will these disparate political parties, and these leaders—significant in their own right—govern with a single-minded focus on development. How will these diverse political parties manage their internal political processes?’’

This will be the real test of democracy in Maldives. And for India, banking on this new step up, the challenge will be to ensure that it keeps both engaged. “If this experiment fails, it paves the way for another strong man coming to power. India’s role will be an earnest broker between these different contending factions. And whether we can play this role effectively, in meeting the expectations of the people. This has never been easy for India because we have become part of the domestic political discourse in our neighbourhood. This will be tricky,’’ says Pant.

India’s current relationship with its neighbourhood proves that this balance will be a steep learning curve. It took two visits by Prime Minister Narendra Modi and three by Sushma Swaraj to calm down Nepal. In the past month, the relationship has soured again. Even in the controlled experiment of democracy in Bhutan, India has emerged as a factor, and not in a positive way. Sri Lanka is indebted to China. As is Maldives—with the Chinese debt at 150 per cent of the GDP.

The economy will be a real issue. It will, literally, buy China influence in the country. And India, so far, is unlikely to offer an alternative. Friendship may be a given with Solih, but India will have work hard to ensure that the relationship remains cordial. China is a reality that will not go away. Despite the new government’s promise to review contracts, China has, as in Sri Lanka, made inroads into the economy. “Even a very pro-Indian government will not turn down Chinese investment. They will not want to jeopardise their relationship with a rising economic power,’’ says Pant.

There is the Chinese FTA—passed in five minutes as Ghafoor puts it. And the shiny Chinese bridge that caused much heartburn in India, is a project that ensured that Maldives will remain in debt for a long time. Can India step up to the challenge? The MDP, which has turned to India for help, needs more than just words of encouragement. The people of Maldives expect more. This is the moment to reach out.