Article 35A: Leaders call on people to stop rumour mongering 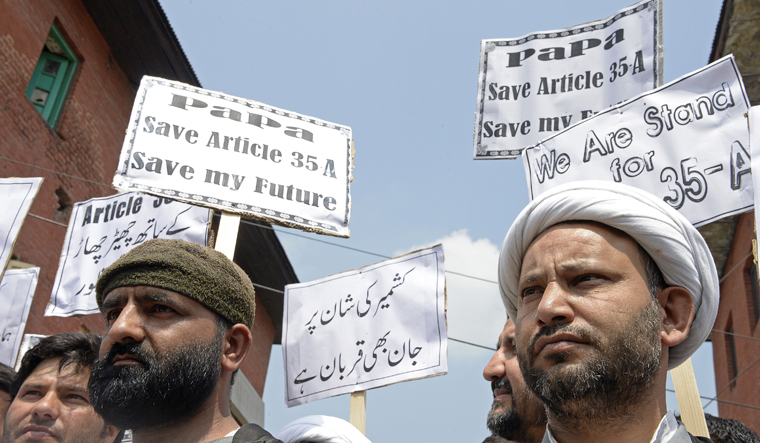 As tension is on the rise in Kashmir in anticipation of the hearing on Article 35A in Supreme Court on August 31, leaders are calling on people to stop rumour mongering.

Senior separatist leader Mirwaiz Umar Farooq slammed the rumour mongers and tweeted to clear the confusion. ''Confusion is being created among people about the hearing of the case pertaining to Article 35A in the Indian Supreme Court for today. In this regard, what has been reported in media, is that a fresh case has been filed challenging Article 35A in SC,” he wrote on the microblogging site.

The separatist Joint Resistance Leadership, comprising Mirwaiz, Yasin Malik, and Ali Shah Geelani, in a statement on Monday, warned of mass agitation in case the Article that protects the 90-year-old J&K State Subjects Law is scrapped.

It warned that any change in the law will evoke a strong response. It said the protests and sit-ins by various traders’ bodies and other segments of society will continue till August 31. In case the Supreme Court announces a verdict against the wishes and aspirations of people of J&K a mass agitation will start across the state, it stated.

“It is a highly emotive issue for the people, affecting their very existence as a people in pursuit of their fundamental Right to self-determination,” the JRL statement said. The statement added the people of Kashmir will never allow their birthplace to become another Palestine, where Israel changed the demography by grabbing land and property of Palestinians.

The Kashmir-based mainstream parties and separatist have found common ground in defence of the Article 35A. Both the PDP and the NC have become a party to the case and engaged lawyers to defend the law. The PDP has nominated senior party leader and noted lawyer Muzaffar Beigh to defend the Article in the Supreme Court. The NC has engaged former solicitor general of India Gopal Subramanium to defend the Article.

A fresh petition against the Article moved by a BJP leader on Monday had lead to spontaneous shutdown across the valley. Around 100 protesters were injured in clashes. The police tried to clarify the confusion over the petition that people mistook for a hearing in the Supreme Court.

Article 35A bars outsiders from settling in Jammu and Kashmir and guarantees special citizenship rights to the people of the state. The law was promulgated in 1927 by the last king of Jammu and Kashmir, Maharaja Hari Singh, a Dogra whose forefathers had acquired Jammu and Kashmir from the British against a payment of 75,000 Nanakshahi rupees after the defeat of the Sikh in the first Anglo-Sikh war in 1846.

The law was given protection by the government of India through Article 35A under Article 370 of the Constitution after 1952 Delhi Agreement between Sheikh Abdullah and Pandit Jawahar Lal Nehru.

The petitions against 35A has raised anxiety in Kashmir, parts of Muslim dominated areas of Jammu and Ladakh because of fears that scrapping of the law will lead to demographic changes in the state.

Muslims, who constitute majority 69 per cent, believe the plan to change Kashmir's demography is aimed at changing the nature of the Kashmir dispute and to nullify the UN resolution that calls for a plebiscite in the state.