Rumours on Article 35A trigger protests in Kashmir, more than 100 injured

Main hearing on Article 35A listed for August 31: Jammu and Kashmir Police 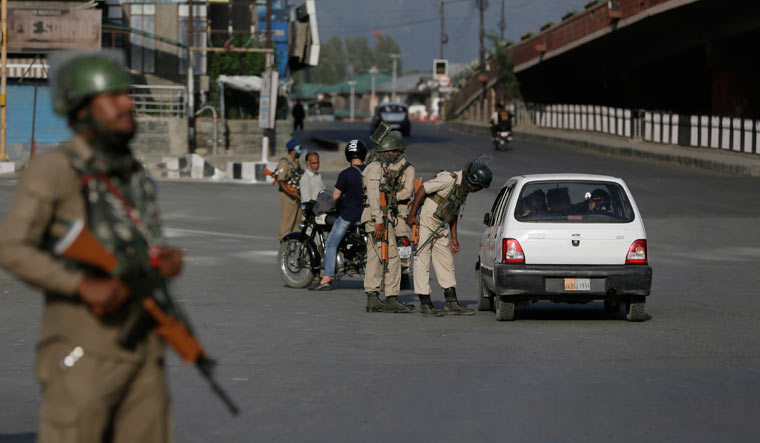 Security personnel interrogate a civilian during a strike in Srinagar | AP

Even as the Supreme Court on Monday adjourned a fresh petition against Article 35A filed by BJP leader Ashwani Upadhyay, more than 100 were injured in Kashmir as protesters took to the streets in Kashmir.

Tension gripped the valley over reports that petitions challenging Article 35A of the Indian Constitution that bars outsiders from settling in Jammu and Kashmir will come up for hearing on Monday. The separatist Joint Resistance Leadership of Mirwaiz Umar Farooq, Syed Ali Shah Geelani, and Yasin Malik had called for a strike on August 26, but this was later changed to August 31.

On Monday, however, the Supreme Court dropped the petition after an adjournment letter was moved by Upadhyay himself.

Earlier in the day, the Jammu and Kashmir police had clarified that the main hearing on Article 35A is listed for August 31. “Confusion has been created about listing of the Article 35A case in the Supreme Court for today. In this regard, let me clarify that it is a fresh case filed with regard to Article 35A which has been listed at S.No 10 before Chief Justice. This has nothing to do with the original case pending in the Supreme Court that may be listed for (August) 31st, though the exact date would be made public on Tuesday. Probably, this new case may also be clubbed with the petition filed by RSS-backed NGO 'We the citizens'", the spokesman said.

In the last hearing, the Supreme Court had said the next hearing in the case would begin in the last week of August. It had not specified any date but word spread that the case will come up for hearing on August 27.

However, that did not help to prevent protests in the valley. The fresh petition created an impression in Kashmir that the case was being heard on Monday. That led to protests in downtown Srinagar. Shopkeepers, including those in Lal Chowk area, the city's commercial centre, quickly downed their shutters. Parents started receiving messages that schools would close after lunch.

The protesters also clashed with police and CRPF who were deployed for security. Protests spread to other parts of Kashmir despite police and separatist leader Mirwaiz clarifying that hearing was scheduled for August 31 and not today.

In south Kashmir’s Anantnag and Shopian, protesters marched on the streets chanting slogans.

Many students also participated in protests in Shopian, including those from government Degree College Shopian. Twenty two protesters were injured in the clashes. Some of the injured were shifted to Srinagar for treatment.

Many protesters pelted stones at security forces who retaliated with tear smoke shells and baton charge. The work in government offices was also affected due to tensions that gripped the valley.

Public transport was not plying full strength causing inconvenience to people. At many places on the Srinagar-Barmulla highway, people were seen seeking rides from private vehicles.

In many localities in Srinagar, announcements were made from mosques informing people about the hearing and to observe a strike. Jammu and Kashmir Police were quick to request people not to pay heed to rumours over hearing on Article 35A.