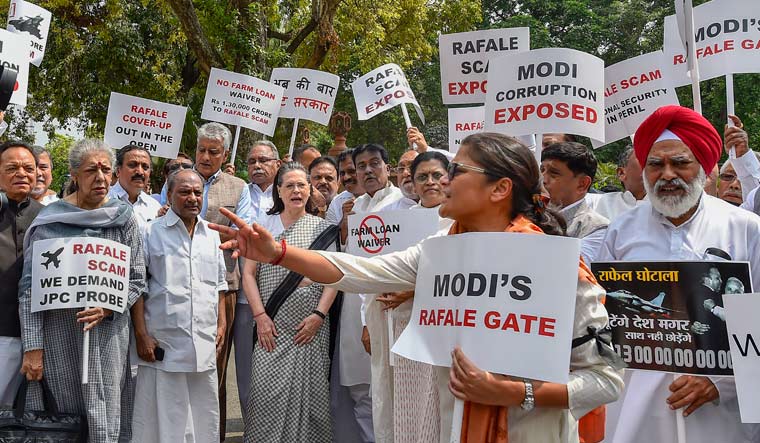 UPA chairperson Sonia Gandhi along with other opposition party leaders raise slogans during a protest against the Union government over Rafale deal issue, at Parliament House | PTI

On the closing day of parliament on Friday, Congress-led opposition launched a blistering attack on the Narendra Modi government over the controversial Rafale fighter jet deal.

Taking up the opposition attack to further level, Congress president Rahul Gandhi, while addressing an event in New Delhi, called the Rafale deal the biggest defence scam the country has ever seen, and blamed Prime Minister Narendra Modi for it.

He claimed that the price of the Rafale jets "magically" rose from Rs 540 to Rs 1600 crore per piece.

"The UPA government had readied the Rafale contract, according to which the price for each jet was approximately Rs 540 crore. The contract was ready and Modi ji only had to take a decision. "But, Modi ji goes to France and scraps the previous contract and the Defence minister and other cabinet ministers do not know about it," Rahul said.

He also alleged that a contract related to the fighter deal was snatched from the state-owned Hindustan Aeronautics Limited (HAL) and given to a private company which has never made an aeroplane nor taken any defence contract.

Earlier in the day, both Rajya Sabha and Lok Sabha witnessed unruly scenes as MPs from opposition staged noisy protests demanding a JPC probe into the alleged scam.

A few days back, Bharatiya Janata Party's rebel leaders Yashwant Sinha and Arun Shourie, and  lawyer-activist Prashant Bhushan had alleged that the Rafale deal was a case of "monumental criminal misconduct" by the NDA government and demanded a time-bound CAG probe into the contract.

What is the controversy?

The Congress has been accusing massive irregularities in the Rafale deal, alleging that the government was procuring each aircraft at a cost of over Rs 1,670 crore as against Rs 526 crore finalised by the UPA government for the procurement of 126 Rafale jets. The deal negotiated by the UPA could not be inked.

The Congress has also been pressing for price details of the deal, but the NDA government has refused to divulge them citing confidentiality provisions of a 2008 Indo-France pact. The government has, however, asserted that there were no irregularities in the deal.