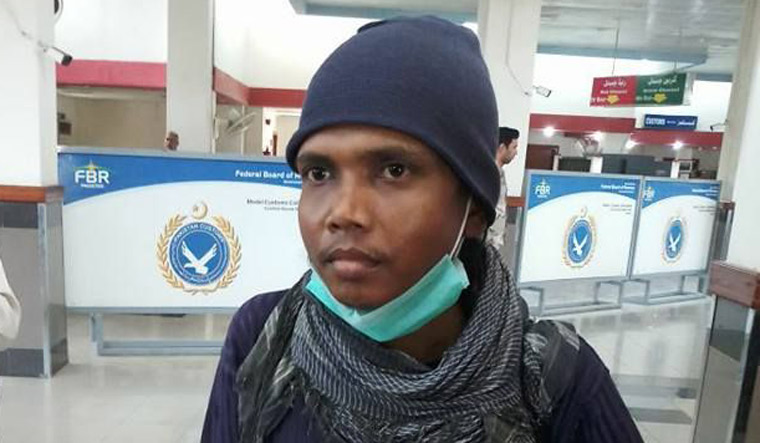 Jitendra Arjunwar at the Karachi airport

A Pakistan returned youth from Seoni district of Madhya Pradesh has been held for allegedly threatening Chief Minister Shivraj Singh Chouhan on Twitter. Jitendra Arjunwar, 22, a sickle cell anaemia patient, was released in May on humanitarian grounds after spending five years in a Pakistani jail.

Jitendra returned home in Barghat village through the Wagah border along with a team of state police who had gone to receive him. Jitendra had strayed into Pakistan by crossing the Rajasthan border in 2013 when he ran away from home. Hailing from an economically backward family, Arjunwar has a brother and mother at home. His brother is an automobile mechanic.

His release from Pakistan was made possible by Pakistan-India People's Forum for Peace and Democracy which took up the matter when Jitendra was about to be released from jail in June 2014 but failed due to lack of citizenship documents. Social activists from both side of border joined the movement when it was known that Jitendra had accidentally strayed into Pakistan border. He was initially mistaken as a spy and sent to Hyderabad jail in Sindh province of Pakistan. Several human-rights activists led by Jatin Desai including Haya Zahid, Ansar Burney, Ali Palh, Haya Emaan Zahid, Altaf Khoso, journalists Beena Sarwar, Allah Bux Arisar had joined the campaign to free Jitendra.

Police sources said that after his return from Pakistan, Jitendra was expecting some help from state government like the Pakistan-returned girl Gita received from central and state governments. He expected Chouhan, like many others, to extend monetary assistance for treatment of his disease. He, however, did not receive any such help except for a little support from local administration, which frustrated him.

Recently, Jitendra procured a cell phone and got a SIM from his brother Bharat Arjunwar. Sources said that he sent threats to Chief Minister Chouhan that he will be ‘’killed if he comes to Barghat during his Jan Ashirwad election Yatra.’’

After the threats were noticed on the chief minister's Twitter account, Bhopal police swung into action. Cyber cell's Superintendent of Police Sudeep Goenka told media that Jitendra created a Twitter account on August 2 and posted threat-tweets from his handle between August 2 and 7. He said that one of the tweets which tagged Chouhan's official handle read: "I will kill you when you come to Barghat for your rally."

Police registered a case against the two brothers under section 506, 507 of IPC 66 and 66C of IT Act. The brothers were brought from Barghat to Bhopal by cyber crime police on Wednesday. They have been released on bail after their statements were recorded by the police.