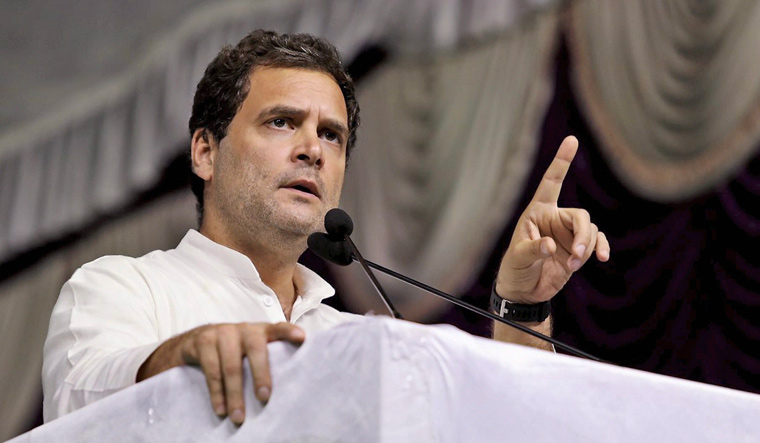 If coal and spectrum auction was the weapon effectively used by the BJP against the Manmohan Singh-led UPA government, it is the turn of the Congress to use the Rafale deal in a similar fashion to taint the NDA government, which until now had a 'scam free' run.

Congress president Rahul Gandhi, in one of the sharpest attack on the government, said the government is using public money to bail out its corporate friends. “Ram naam japna, paraya maal apna (robbing in the garb of saint)” Rahul Gandhi had said, borrowing a popular colloquial phrase to describe Rafale deal, which he claimed was a scam involving over Rs 1.3 lakh crore public money.

The Congress is arguing that under the UPA, the price of a Rafale warplane was Rs 526 crore, but under the new deal, a unit of Rafale jet is costing Rs 1,670 crore, causing a loss Rs 48,000 crore to the exchequer. The grand old party is alleging that the deal exposed the BJP government’s “crony capitalism and compromise” of national interests.

The Congress also questioned the reluctance of the prime minister and defence minister to reveal the original price of Rafale jets, and claimed that the secrecy clause that the government cited as the reason for not divulging details about the jets is “non-existent”.

The plan of the Congress is to create a suspicion around the deal so that it becomes a talking point in the public. Their earlier attempts to use demonetisation and implementation of Goods and Service Tax to target the government, however, did not pay much political dividend.

The Congress Working Committee (CWC) has decided to launch a jan andolan (people’s movement) on Rafale deal to target the Narendra Modi-led government ahead of 2019 polls. “There will be a series of public meetings to create awareness on the issue across India and also a series of press conferences. The whole idea is to tell the common person on the street about wrongdoings in Rafale deal,” Randeep Surjewala, chief spokesperson of the Congress, told THE WEEK.

On the other side, the government is claiming that it has struck a better deal. Union minister Ravi Shankar Prasad said (outside Parliament) that the base price of each aircraft is €91.75 million while the UPA was negotiating at €100.85 million. The government said the cost had increased because of several India-specific enhancements. Defence ministry officials, without disclosing the price, listed several of these enhancements: helmet-mounted display sights (allows pilots to aim by merely looking at the target), a radar warning receiver (to detect enemy radar), low-band jammers, a radio altimeter, doppler radar and extreme cold weather start-up for airfields like Leh. The weapons package include Meteor air-to-air missiles that can shoot down aircraft 120-140km away, and the storm shadow cruise missile for striking airfields, military headquarters and strategic installations up to 500km away.

Besides the cost, the Congress has called out the lack of transparency in the deal. “No one can purchase a single nut or bolt in the government of India without a tender,” said Surjewala. “How did the prime minister decide to spent Rs 61,000 crore without going through a tender process.” He further said the approval of the cabinet committee on security (CCS) was not taken before announcing the deal and that the price negotiating committee was not allowed to freeze the price, as per defence procurement procedures. It was also alleged that Modi announced the deal in Paris, in April 2015, in the absence of the then defence minister Manohar Parrikar.

However, Defence Minister Nirmala Sitharaman said the agreement for 36 Rafales was signed in the presence of France’s defence minister and Parrikar. She further claimed that the approval of the CCS was obtained for the deal and added that no procedure was violated.

Officials in the South Block, however, claim that not even the top hierarchy of the Indian Air Force was kept in the loop. A day before official talks between PM Modi and former French president Francois Hollande, the then foreign secretary S. Jaishankar, on April 8, 2015, had told media, "In terms of Rafale, my understanding is that there are discussions under way between the French company, our ministry of defence, and the Hindustan Aeronautics Limited (HAL), which is involved in this. These are ongoing discussions. We do not mix up leadership level visits with details of ongoing defence contracts. That is on a different track. A leadership visit usually looks at the big picture issues even in the security field."

Furthermore, the Congress is seeking explanation on the selection of a specific private company, with zero experience in aircraft manufacturing, to partner with Dassault Aviation (manufacturer of Rafale jets) in place of HAL for the defence offset. This part of the agreement, known as the offset obligations, was estimated at Rs 30,000 crore. It alleged that the government flouted all rules and regulations to benefit Reliance Aerostructure Limited (RAL) in the Rafale deal.

Surjewala said, “The Reliance company was floated just 10 days before the deal, on March 28, 2015. While Reliance Aerostructure Limited did not even own a land on date of acquiring license (February 22, 2016), what is even more surprising is that RAL was incorporated on April 24, 2016, 14 days after the announcement of purchase of 36 Rafale aircraft.”

Both the government and the Congress are leveling allegations of 'misleading' the Parliament and brought privilege motion against each other in the Parliament.

Sitharaman had quoted Article 10 of the intergovernmental agreement (IGA) between India and France, on purchase of Rafale aircraft which says protection of classified information and materials exchanged under IGA shall be governed by the provision of security agreement signed on January 5, 2008. However, the 2008 agreement was only for ten years. The same agreement was renewed for next ten years during French President Emmanuel Macron’s visit to India in March.

Giving details of the agreement, Minister of State for Defence Subhash Bhamre told the Parliament on March 28, “An agreement between India and France regarding the exchange and reciprocal protection of classified or protected information was signed on March 10, 2018, during the state visit (sic) of president of France to India. This agreement defines the common security regulations

applicable to any exchange of classified and protected information between the two countries.”

Nonetheless, the agreement does not mention about exchange of commercial details and costs and only talks about classified and protected information between the two countries. Experts claim that such intergovernmental agreement only covers intelligence sharing and most countries sign similar agreements with each other.

Bhamre, in November 2016, had already informed the Parliament that cost of each Rafale aircraft is approximately Rs 670 crore without associated equipment, weapons, India specific enhancements, maintenance support and services.